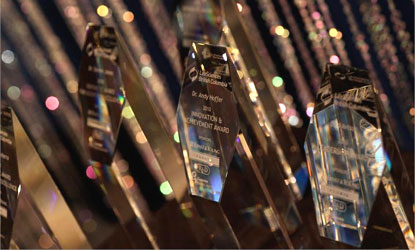 These awards are presented annually by LifeSciences British Columbia to recognize individuals and organizations that have made outstanding contributions to the development of British Columbia's life sciences industry across all sub-sectors, from biopharmaceuticals and medical devices to bioproducts and bioenergy - sectors which are critical to the economic future of the province and country.

This year's theme, From Curiosity to Discovery, reflects the fact that the smallest ideas can blossom into major innovations that have an enormous impact on our lives. “As we celebrate the Year of Science here in BC, and work to instill an appreciation of the contribution science makes in our society, it is particularly timely that we acknowledge our top innovators and their achievements,” commented Don Enns, President of LifeSciences British Columbia. “We need to celebrate the fact that British Columbia is continually on the global forefront of science and technology development, as exemplified through the work of this year's Award recipients.”

LifeSciences BC also announced that the Lifetime Achievement Award will be permanently re-named as the “Dr. Don Rix Award for Lifetime Achievement” in recognition of Dr. Rix's unparalleled contributions as a medical practitioner, entrepreneur and philanthropist. He was without a doubt, a life sciences pioneer within the Province, and a true icon of the industry.

The LifeSciences British Columbia Awards will be presented at a gala ceremony on Thursday, April 14th, 2011 in front of an audience of approximately 600 biopharmaceutical, medical device, bioproducts, bioenergy and greater life sciences community and public policy leaders at the Vancouver Convention Centre.

LifeSciences British Columbia is a not-for-profit, non-government industry association that represents and supports the biopharmaceutical, medical device, bioproducts, bioenergy and greater life sciences community of British Columbia through facilitation of partnering and investment, advocacy, education, and promotion of our world-class science and industry.