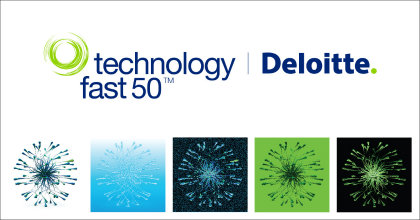 Vancouver, BC, November 13, 2013--(T-Net)--Deloitte today announced the winners of its Technology Fast 50™, Companies-to-Watch and Green 15 program™, and 10 BC technology companies (or 20%) were recognized for their exceptional growth over the past 5 years.

Now in its 16th year, the Technology Fast 50™ program recognizes Canadian technology companies for technological innovation, entrepreneurship, rapid growth and leadership. This year the program welcomes 17 companies that are making the Fast 50 list for the first time.

For the second year in a row, the number one ranked company on the Technology Fast 50™ list hails from Vancouver.

Vancouver-based QuickMobile, a developer of secure mobile event apps, took the top spot with a growth rate of 10,444% over the past 5 years.

(Please see the specific growth rates for each company in the chart and list below).

“We have several newcomers to the Technology Fast 50™ program this year, particularly in the Companies-to-Watch category,” said Richard Lee, Technology, Media and Telecommunications Deloitte. “There were so many noteworthy Companies to Watch (CTW) that we have the highest number of recipients in this category this year. These companies represent the future of the tech sector in Canada.”

As a result of increased activity in the start-up sphere, Deloitte is also recognizing a record 14 Companies-to-Watch award winners in 2013. HootSuite (Vancouver, BC) was recognized this year as a BC "Company to Watch".

Results of the annual Technology Fast 50™ CEO survey show technology firms to be optimistic, especially in light of the support they receive through government investment and strong accelerator programs.

Findings from Deloitte's annual CEO survey of Technology Fast 50™ companies suggest optimism within the industry. 66% of respondents believe that outside of Canada, the global economy will grow significantly — a marked increase in optimism compared to 2012 when only 46% of respondents felt there would be strong growth in the overall world economy.

The survey revealed that 72% of CEOs agreed that the various levels of government do enough to support Canadian technology companies. Further, a strong majority of survey respondents who expressed an opinion (80%) agree that the SR&ED (Scientific Research and Experimental Development) tax credit program works well and needs no major improvement. 69% of respondents who shared an opinion also agreed that Canada's strong network of accelerator programs help early stage technology companies succeed.

“Finding and attracting people are two of the most important talent challenges facing the Fast 50 companies,” said Richard Lee. “Having the right talent is crucial for innovation and growth. Fast 50 companies look to networking and social network tools more than methods such as job firms and executive search firms to find talent.”

Note: The Deloitte Technology Fast 50 Program recognizes the 50 fastest growing Canadian technology companies with the highest percentage revenue growth over five years. Qualifying companies must have headquarters in Canada, have been in business for at least five years, have revenues of at least $5 million, own proprietary technology, and conduct research and development activities in Canada.

A complete list of Technology Fast 50™, Companies to Watch™ and Green 15™ winners is available here.

About the Deloitte Technology Fast 50

Recognizes the 50 fastest growing Canadian technology companies with the highest percentage revenue growth over five years. Qualifying companies must have headquarters in Canada, have been in business for at least five years, have revenues of at least $5 million, own proprietary technology, and conduct research and development activities in Canada.

Since its inception in 1998, the program has grown to include four distinct categories, including the Technology Fast 50™ ranking, Companies-to-Watch, Technology Green 15™ and Leadership awards.

Launched 16 years ago, the Technology Fast 50™ program celebrates the world-class achievements and the tremendous evolution of the Canadian technology sector.