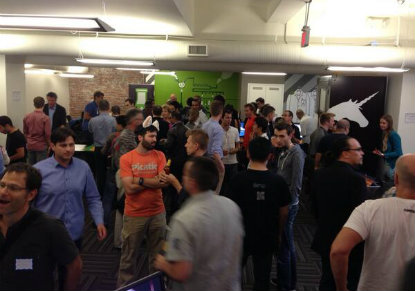 Vancouver, BC, August 30, 2013--(T-Net)--Launch Academy held a science-fair inspired Pitch Day on August 28th and showcased 21 up and coming start-ups to a crowd of 250 people including investors, angels, VC's, media, entrepreneurs, and industry professionals, and Tangoo Nights (https://www.tangoo.ca/) was the announced winner.


According to the company, the most interesting story that night came from Launch Academy's Student Startup Challenge (SSC) that was launched four months ago.

Out of 37 teams, five teams were selected as SSC finalists and out of the five SSC finalists, only two remained standing at Pitch Day: Cognilab and Helphub.

Cognilab has recently been accepted to one of Canada's accelerator programs, GrowLab, and is working on creating a virtual laboratory for psychology research.

“There's nothing better than coming into the Launch Academy and feeling energized by the entrepreneurial buzz within the space. Launch Academy opened doors that it would have taken years for us to find on our own.” said José Barrios, CEO and co-founder of Cognilab, who came in first place and won a prize money of $3,000 sponsored by LX Ventures.

“Three of five finalists faced unforeseen challenges that put their startups on hold”, said Alex Chuang, Program Director at Launch Academy and the person behind the SSC.

“We pivoted, tested and tried finding products in the 3D printing market that would add value to our customers, but we couldn't find an effective product market fit. Launch Academy helped us realize this sooner rather than later.” - Shivin Bakshi, co-founder of CADTOHAND, one of the finalists of the Student Startup Challenge.

Chuang added, “Entrepreneurship is not glamorous. It is incredibly difficult. I am extremely proud of Cognilab and HelpHub for making it this far and of the other three finalists who took on the challenge of being entrepreneurs and iterated on their learnings during their time at Launch Academy.”

Cognilab and HelpHub were among the 21 startups demoing at Launch Academy Pitch Day. They set up booths and showcased their products at Launch Academy's newly renovated 12,000 sq ft headquarter.

Pitch Day attendees then voted for their top five favourite startups. After all the votes were cast, the top five startups then presented their 5-min demos to a panel of five judges.

The winners won a choice of 30 minutes with Angel, Mike Edwards (Executive Director at GrowLab; CEO at LX Ventures), or - after months of hard work an option of a night out for two to a Canucks game, or a free pass to Launch Academy's upcoming Lean Entrepreneur Program ($3500 value).

Here are the top five up and coming startups from LA PitchDay:

The story of the Tangoo brand dates back to 2010 in the beautiful city of Barcelona. The logo originally came to fruition as it was imprinted on a bracelet for a Brand Management school project at the ESADE School of Business.

Sauder School of Business alumni Henry Heeney and Paul Davidescu originally founded the concept behind what Tangoo is today.

During the extensive branding process, Henry had taken a liking for Paul's bracelet from Barcelona and urged it be utilized for naming the new venture. Since the concept was so new to Vancouver, a new word seemed to be appropriate to accompany it. Like the dance, Tangoo is a metaphor for moving in a meaningful way across ones city. It embodies effortless and meaningful movement while always knowing the next step.

Tangoo was created with one purpose in mind; to help Vancouverites get the most out of their evenings. The goal was to design complete night out with the perfect blend of people, distinct places, authentic food, stiff cocktails, and ultimately, great memories. Henry and Paul dreamed up the concept of Tangoo after realizing that Vancouver's social scene needed a boost. They had to find a way to ease the pain of disastrous last-minute group planning and the difficulty with meeting new people around the city.

They knew it was key to bring people together by making planning simple and having things taken care of. It had to be exciting, dynamic, and conducive to good conversation. They realized that their habits of hopping to different restaurants and bars matched all of these criteria perfectly, and therefore, it had to be built with their new hassle-free, VIP experience.

By marrying the two ideas of social multi-venue spontaneity and simple planning, Tangoo was born.

Launch Academy is a pre-accelerator program that helps entrepreneurs execute on their startups through education, mentorship, lean metrics and networking opportunities. Launch Academy has established an environment where ideas are vetted, business models are tested and successes are celebrated.

Founded on the values of innovation, opportunities and accountability, Launch Academy addresses the lack of startup education and resources affecting Vancouver entrepreneurs. Launch Academy aims to build a vibrant startup ecosystem and a prosperous economy where new jobs are created and new markets are discovered.

For more information check out www.launchacademy.ca