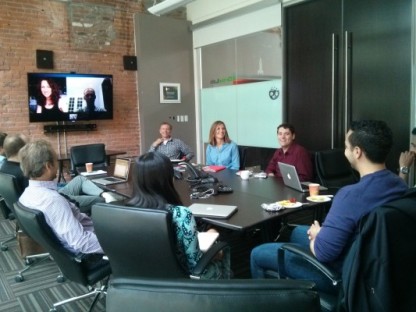 Vancouver, BC, September 6, 2013--(T-Net)--GrowLab reported on their blog this week that a total of seven companies that will be part of their new Fall 2013 Cohort.

Growlab indicated that it received over 400 submissions, 40 percent of which were international applications. This time around, they are including 3 startups from the international talent pool: Restly, Skift and Zeetl.

“Entrepreneurs everywhere have begun to see Vancouver as a great place to build their businesses. It's great to see talents from around the world wanting to a part of GrowLab. It solidifies us as a leader in accelerating tech startups”, said Executive Director, Mike Edwards.

The Zeetl team hailed from Ukraine and discovered GrowLab from the Startup Visa Canada program. They reached out to Version One Ventures, which is led by GrowLab's own Boris Wertz. Zeetl is too early for venture funding but holds a lot potential, according to Growlab's blog report. After going through Growlab's application process, Zeetl secured a spot in the Fall 2013 Cohort.

Mike Edwards and Leonard Brody discovered Saskatchewan startup, Farm At Hand at metabridge in Kelowna, and they met with Skift when they were in New York. And Retsly got on their radar shortly after the GROWConf.

Cognilab (the winner of Launch Academy's Student Startup Challenge (SSC) uprooted their startup from Victoria to Vancouver after becoming a finalist of SSC. After a few months of hustling, they caught Growlab's attention.

Meet the 7 startup companies below that have secured a spot in Growlab's program and which will attempt to "reach new heights" within 3 months:

Cognilab is an online laboratory for creating, crowdsourcing and sharing psychology experiments.

Farm At Hand is a multi-platform, cloud-based farm management program allowing producers to manage production activities and agribusinesses to exchange real-time information with their customers.

Skift is a travel intelligence company that offers news, information, data and services to professionals in the travel industry and professional travelers to help them make smart decisions about travel.

Zeetl is a social telephony and messaging platform that allows its users to call and message their Twitter, Facebook, LinkedIn friends for free without a need to know or dial phone numbers.

In our search for talents, GrowLab reported that it comes across potential teams that are a little too early to be a part of their "full" program. When that happens, they invite such companies to be a part of their Farm Team. Here are the two startups that will be joining GrowLab's farm team this Fall:

JustParts is a patented platform that simplifies online buying and selling of parts and accessories.

GrowLab is a Vancouver-based startup accelerator that helps entrepreneurs build great companies through seed funding, mentorship, collaborative workspace and 3 months of intensive programming. GrowLab brings together the best and brightest entrepreneurs from the world and connect them with our global network of top tier investors, mentors and partners.

Founded by five angels and VCs: Boris Wertz (Version One Ventures), Leonard Brody (Clarity Digital), Debbie Landa (Dealmaker Media), Jason Bailey (East Side Games), GrowLab provides entrepreneurs a unique wealth of wisdom, knowledge, and connections. Over the past year, GrowLab has invested in 14 companies and steered them in the right direction to success.

GrowLab and its founders are committed to becoming “hunters of talent” and actively search for cohort members by attending and hosting events in tech hubs around the world. All four founders and Edwards travel extensively looking for talent and young companies who need a launch pad, and the group believe their presence in Vancouver and San Francisco make them a uniquely powerful place for that to happen.