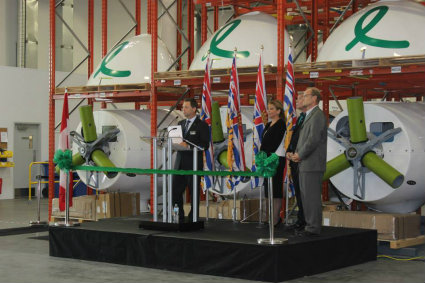 Surrey, BC, October 10, 2014--(T-Net)--Surrey-based Endurance Wind Power Inc., a leader in distributed wind energy, a major BC exporter and a leader in Canadian cleantech manufacturing, announced that it has opened a major new 40,000 square foot manufacturing facility in South Surrey, BC.

With growing sales in the UK, US, Italy and Canada, and a vision of creating a global wind network to deliver localized, affordable clean energy, Endurance has opened new premises in Grandview Heights to expand its wind turbine assembly operations and head office professionals.

"This year alone, we've created 80 new jobs at Endurance; 40 of them right here in the Lower Mainland. These are new, clean energy jobs that help grow the cleantech manufacturing base in BC and increase the adoption of distributed energy from wind power," said Glenn Johnson, CEO of Endurance Wind Power.

"This new 40,000 square foot facility is indicative of how far we've come in a relatively short time. We started here in Surrey in 2007, just six of us, with a one room office and a big vision of creating a global network of wind power to deliver affordable clean energy," Mr. Johnson adds.

"Endurance is creating valuable jobs here in Surrey by driving the growth of cleantech manufacturing for export around the world. They employ local graduates in engineering and manufacturing," said City of Surrey Mayor, Dianne Watts. "This is Endurance's third office and second factory here in Surrey and this beautiful new facility will be their home for many years to come."

Endurance Wind Power's new facility houses its corporate headquarters and the manufacturing facility for the company's best-selling E3120 wind turbine. The 50 kW E3120 generates enough clean energy to power a dairy farm, hospital or school. Endurance has shipped over 600 of this model to global markets.

Endurance Wind Power is headquartered in Surrey, British Columbia and has offices in the UK, Italy and Denmark, test facilities in the US and manufacturing facilities in Canada and the UK. The Endurance 50 kW E-Series and 225 kW X-Series turbines are designed in-house to meet the needs of distributed wind power applications such as farms, dairies, institutions and light industry. Today, Endurance employs 155 people and boasts 750 wind turbines installed worldwide which have generated more than 13 million operating hours.

Endurance began as a manufacturer of wind turbines, sold through a network of third-party dealers, and developed a global reputation for product quality and customer service. Endurance has recently begun to transition into a distributed energy generation company by directly owning and operating wind turbines in its major markets. This transition enables Endurance to capitalize on the large and growing global market for renewable energy generation. 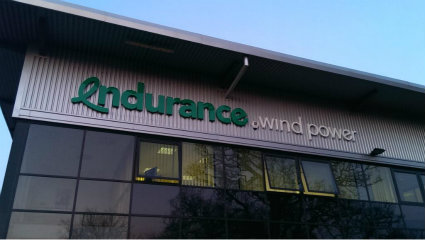