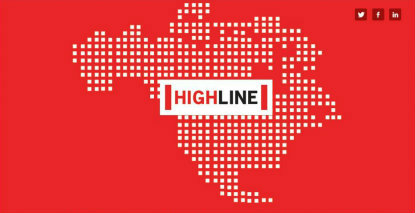 Vancouver, BC, August 20, 2014--(T-Net)--Vancouver-based startup accelerator GrowLab Ventures and Toronto's Extreme Startups have announced their merger and the launch of HIGHLINE, the first "pan-Canadian" accelerator platform.

Extreme Startups' and GrowLab's respective Executive Directors, Marcus Daniels and Jonathan Bixby, reported in a press release that they had a vision to create one program that would unite the best entrepreneurs, investors and ecosystem partners living above the 49th parallel - the “highline” that separates Canada and the US - by merging their two top tier accelerator programs.

The “merger of equals” creates a new accelerator platform called HIGHLINE and is made possible by the financial backing of major Canadian VCs, including BDC Capital and Relay Ventures.

BDC Capital, the investment arm of the Business Development Bank of Canada (BDC), was also a shareholder and strategic partner of both accelerators and has been HIGHLINE's principal strategic backer since the merger was first conceived.

“The accelerator sector is already very mature with over 1,700 programs worldwide,” says Marcus Daniels, HIGHLINE's cofounder and new CEO. “But less than 60% of them have helped entrepreneurs get funded and 90% have had no exits at all”. Relentlessly focused on evolving the accelerator model, Daniels is a serial entrepreneur and seed investor with 24 years of digital innovation experience.

While Extreme Startups and GrowLab have been among the more successful accelerators (over 90% of their graduates raised follow-on institutional capital totaling more than $27 million, and both programs combined had 3 highly profitable exits over their 30-month existence), Bixby and Daniels saw the merger of their two accelerators as the inevitable next step in order to rise above the noise, evolve the model and attract the very best in Canada.

Says Bixby: “I'm really excited that this new entity will not only attract the very best Canadian founders, but that it will also be the best option for many entrepreneurs globally.”

“HIGHLINE's ambition is to supercharge 1000 founders who will create over $10 billion in equity value outside of Silicon Valley over the next decade,” says Daniels. He expects over 90% of those startups to establish their headquarters in Canada as there are “few better places on the planet to build digital products than the Vancouver-Waterloo-Toronto-Montreal ecosystems”.

“We see this merger as crucial to building off the past strong performance of the two programs,” says Michael Mahon, Director, Venture Capital - Strategic Investments & Partnerships at BDC Capital. “The creation of a premiere pan-Canadian option in a global environment that is increasingly competitive with regards to entrepreneurial talent and capital will be a key differentiator for HIGHLINE.” BDC Capital had already invested a total of $5.7 million in 38 graduates of HIGHLINE's predecessors through its convertible notes funding program. The merged entity will remain a core accelerator partner for BDC Capital, says Mahon, and its startups will continue to be eligible to receive its $150,000 convertibles notes.

Varma and Brody join HIGHLINE's Board of Directors, together with Daniels, BDC Capital's Michael Mahon and Alex Baker of Relay Ventures.

Jonathan Bixby will remain involved as part of the Board of Advisors, alongside Paul Singh, founder of Disruption Corporation and formerly of 500 Startups.

HIGHLINE is in discussions with other notable potential partners and intends to reveal new “co-conspirators and collaborators” over the coming weeks.

HIGHLINE will begin hosting startups this fall at its Vancouver and Toronto anchor campuses. It will primarily target “digital startup founders close to product-market fit with global ambition to scale”, instead of ventures that are still at the ideation stage. Applications open today at HIGHLINE.vc.

While it will build on the collective experience of GrowLab Ventures and Extreme Startups, HIGHLINE will innovate in a number of ways, according to the companies.

For one, it will propose a number of specialized, tailored acceleration “products” rather than a single, one-size-fits-all program as in traditional accelerators. It will also better support founders' global ambitions by offering greater and earlier connection to global markets like New York and San Francisco; and it will provide startups with as much as $200,000 in financing, not necessarily at the beginning and end of the program but at timely stages that best fuel their growth. Other platform details will be made available in the coming weeks.

HIGHLINE is a VC-backed founder driven co-venture platform that helps early stage digital startups supercharge growth and raise institutional capital. It is relentlessly focused on giving founders “Speed to Seed” through specialized accelerator programs, timely staged investing (up to $200K) and rapid connectivity in key global markets starting with Vancouver, Toronto, New York City and San Francisco. It creates acceleration products and programs for founders close to product-market fit with global ambition to scale. It is powered by the financial backing of major Canadian VCs, including BDC Capital and Relay Ventures, whose funds under management collectively exceed $2 billion.

HIGHLINE currently has an active portfolio of 40 companies, 90% of which have received institutional follow-on capital, raising over $27 million. It has so far had 3 highly profitable exits over a 30-month period.

A subsidiary of the Business Development Bank of Canada (BDC), BDC Capital offers a full spectrum of specialized financing and investment solutions to help Canadian entrepreneurs achieve their full growth potential. With more than $1 billion under management, BDC Capital takes a strategic, patient approach to nurture companies' development over the long term.

From venture capital to equity to growth and transition capital, our team of over 100 experienced, local professionals partner with entrepreneurs to identify and meet their needs on flexible terms. Some of the sectors in which we specialize include IT, industrial/clean/energy technology, and healthcare. For more information, please visit www.bdccapital.ca.

Relay Ventures is an early stage venture capital firm that invests in passionate entrepreneurs disrupting incumbent industries and creating new markets with the power of mobile computing. Unlike other funds, Relay exclusively focuses on software for mobile (from the sensor to the cloud), creating an unparalleled set of networks and resources that tangibly help founders build world-class companies. With offices in Menlo Park and Toronto, the firm is active throughout North America. For additional information, visit www.relayventures.com.