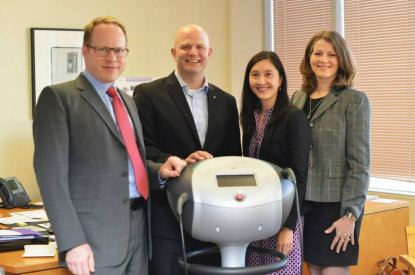 Vancouver, BC, January 14, 2015--(T-Net)--Verisante Technology, Inc. (TSX VENTURE:VRS), a leader in cancer detection technology, announced today it has entered into a collaboration with the BC Cancer Agency and Imperial College Healthcare NHS Trust to develop a new application for the Company's exclusively licensed platform technology.

Dr. Haishan Zeng, a distinguished scientist in the Integrative Oncology Department at BC Cancer Agency is leading the development of the endoscopic Raman probe that will be used in the study.

"Using Verisante Core™ for delineation of brain tumour margins could be a significant new use for the device," said Dr. Zeng, who is also a professor of dermatology and skin science at the University of British Columbia in addition to his work at the BC Cancer Agency. "Our collaboration with Imperial College Healthcare NHS Trust enables us to keep testing the technology on real patients in a clinical setting using new applications."

Brain tumours are rare but have a disproportionate effect on society as they often strike the young. For this reason brain tumours result in more years of life lost than any other tumour. The first step in the patient pathway is often brain surgery which is understandably delicate and highly precise. One of the major obstacles to removing brain tumours is the fact that the boundary between the tumour and normal brain is very hard to see using the naked eye, even with an operating microscope. The group will focus on collecting data during brain tumour surgery done at Charing Cross Hospital in London, England.

"With this new international partnership between Verisante and Imperial College Healthcare NHS Trust, London, we are hopeful we will be able see beyond the naked eye to diagnose and map brain tumours during surgery using Verisant's Raman laser spectroscopy system," said Mr. Babar Vaqas, a Neurosurgeon and Principle Investigator of the study at Imperial College Healthcare NHS Trust. "This study will be unique in that it will be the first ever application of Raman spectroscopy during human brain surgery."

About the BC Cancer Agency

The BC Cancer Agency is part of the Provincial Health Services Authority (PHSA), providing province-wide specialty healthcare in British Columbia (BC), Canada. The BC Cancer Agency provides a comprehensive cancer control program for the people of BC by working with community partners to deliver a range of oncology services, including prevention, early detection, diagnosis and treatment, research, education, supportive care, rehabilitation and palliative care. For more information, visit www.bccancer.bc.ca.

Imperial College Healthcare NHS Trust comprises Charing Cross, Hammersmith, Queen Charlotte's & Chelsea, St Mary's and Western Eye hospitals. With more than one million patient contacts each year, it is one of the largest acute Trusts in the country and, in partnership with Imperial College London, is the UK's first Academic Health Science Centre (AHSC). It has an annual turnover of around £970 million. The Trust was created on 1 October 2007, by merging Hammersmith Hospitals NHS Trust and St Mary's NHS Trust.

Imperial College Healthcare is one of eleven NIHR Biomedical Research Centres. This designation is given to the most outstanding NHS and university research partnerships in the country; leaders in scientific translation and early adopters of new insights in technologies, techniques and treatments for improving health. Imperial College Healthcare has some of the lowest mortality rates in the country according to the Dr. Foster Guide - an annual, independent report published 2012.

For more information about the Trust visit http://www.imperial.nhs.uk

The cancer detection platform was developed by the BC Cancer Agency and tested and refined at the Skin Care Centre at Vancouver General Hospital. This exclusive platform technology allows Verisante to develop and offer a range of compact, non-invasive cancer detection devices that offer physicians immediate results for many of the most common cancers. Aura™ has been approved for sale in Canada, Europe and Australia. The Core™ has not yet been approved for sale.

Verisante Aura™ was awarded the 2014 North American Technology Innovation of the Year Award for In Vivo Cancer Detection by Frost & Sullivan, Popular Science Magazine's "Best of What's New Award" for 2011, awarded a 2013 Prism Award for Innovation in Photonics and an Edison Award for Excellence in Innovation in 2013. Verisante Core™ was named one of the top 10 cancer breakthroughs of 2011 by the Canadian Cancer Society.

This release contains forward-looking statements, including, but not limited to, statements regarding the future commercialization of medical devices, the market demand for these products and the proprietary protections the Company will obtain with regard to the technology, all of which statements are subject to market risks, and the possibility that the Company will not be able to obtain patent protection or obtain sufficient customer demand. These statements are made based upon current expectations and actual results may differ from those projected due to a number of risks and uncertainties.