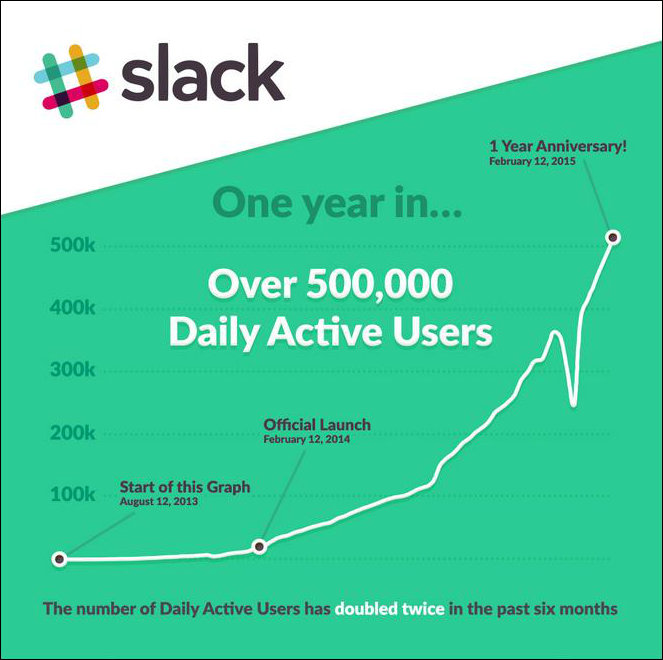 Vancouver, BC (and San Francisco, CA), February 12, 2015--(T-Net)--Slack Technologies Inc. (www.slack.com), developers of a "team communication tool" or platform also called "Slack", reported today that at it's one year anniversary, is now the fastest growing business app ever.

Slack is a San Francisco-based company founded by core members of the original Flickr team including Slack CEO Stewart Butterfield.

Slack is a team communication tool that brings together all of a team's communications in one place, instantly searchable and available wherever you go. The product offers a real-time messaging, archiving and search tool that endevors to facilitate better communication within a team, than traditional; methods such as email.

Slack was launched "officially" just a year ago on Feb 12, 2014, and the company is based in San Francisco but also has a major and growing office and presence in Vancouver, BC as well (in Yaletown).

The company today reported some astounding growth figures on its one year anniversary, as follows:

The company reported today in a press release that it's blistering growth has continued into 2015: daily active users have grown 35% in the first six weeks of the year alone.

“Slack is leading the world into a new way of working,” says John Doerr, general partner of KPCB and Slack board observer. “The velocity of their growth is setting new standards as Slack delights teams both large and small. Slack drastically reduces internal email and revolutionizes information streams. We're witnessing the birth (and birthday) of a new enterprise technology leader.”

The rapid proliferation of new product categories of business software over the last 15 years has led to increasing fragmentation of communication channels. Slack reported that it solves this critical workplace challenge by integrating dozens of different information flows into one centralized, searchable resource.

“Messaging has emerged as one of the most fundamental applications of the Internet, and its value is shifting into our work lives,” says Stewart Butterfield, CEO and co-founder of Slack. “Slack radically increases internal transparency and turns communication archives into a powerful shared resource. The advantages are so big that we feel safe predicting all businesses will move a centralized system for communication within the next 10 years.”

“I've been working closely with and analyzing SaaS companies extensively for nearly seven years, and based on the data I've seen, Slack is the fastest growing B2B company to hit these milestones in 12 months,” said Tomasz Tunguz, a Partner at Redpoint Ventures and SaaS industry analyst. “Slack has grown four fold over the last 6 months alone.”

Much of the success Slack is receiving is thanks to it's customer-focused product development and the prioritization of features people actually need, according to the company. These include reliable search, platform synchronization and simple file-sharing, in addition to the ever growing list of integrations with essential tools like Twitter, Dropbox, MailChimp and Github.

“From the moment we started using Slack, it transformed how we tackled projects and connected as a team,” said Matthew Eckstein, VP of Engineering at charity: water. “Slack's real-time nature fosters collaboration in a way that email just doesn't. We continue to use it more and more in our organization to consolidate our conversations. Slack is just more efficient, and it's engaged employees in way that was impossible before.”

Slack is a messaging and search platform that brings team communication into one place, creating a single unified archive accessible through powerful search. It integrates with dozens of popular services such as Twitter, Dropbox, Trello, Asana, Google Docs, JIRA, MailChimp, Stripe, Zendesk and others to help consolidate and make sense of the ever-growing flows of data that confront modern teams. Since launching in February 2014, Slack now has more than 500,000 daily active users across more than 60,000 teams.

Based in San Francisco, with an office in Vancouver, Slack has raised $162 million from investors including Kleiner Perkins Caufield & Byers (KPCB), Google Ventures, Accel Partners, Andreessen Horowitz and The Social + Capital Partnership.