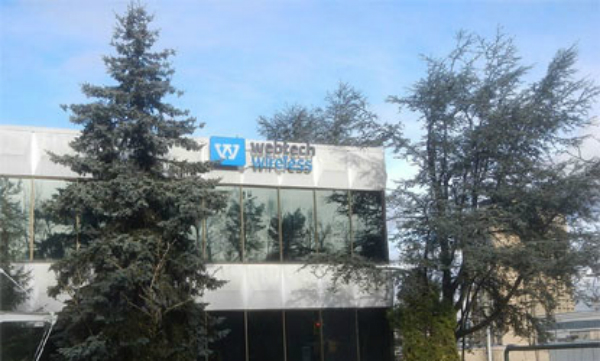 On July 30, 2015, the Company announced it had entered into a definitive arrangement agreement with BSM Technologies Inc..

Subject to the terms of the Arrangement Agreement, BSM will acquire all of the outstanding common shares of the Company for $0.52 in cash plus 2.136 BSM common shares for each common share of Webtech Wireless (the “Arrangement”).

The transaction is structured as a merger of equals and upon completion, existing BSM and Webtech Wireless shareholders will own approximately 51% and 49% of the combined company, respectively.

The transaction is scheduled to be completed on September 30, 2015, pending receipt of certain approvals including the approval of the shareholders of each company, approval of the Supreme Court of British Columbia as well as certain regulatory approvals.

“We began this fiscal year 2015 with a commitment to all of our stakeholders that we would return Webtech Wireless to consistent profitability levels as we released industry leading telematics solutions, rebuilt our sales pipeline through new sales leadership and renewed our focus on customer satisfaction,” commented Andrew Gutman, Chairman of the Company and CEO.

“We are pleased that these efforts delivered tangible results in terms of revenue and EBITDA performance this quarter. Every member of the Webtech Wireless team deserves credit for helping to deliver our best EBITDA quarter to date. We remain disappointed that recurring revenue continues to lag behind our objectives, but we believe we are making great strides towards generating subscriber growth in our government and commercial markets, and reducing ongoing churn. Finally, it goes without saying that we are also excited about the recently announced merger of equals transaction with BSM Technologies and are confident that the scale inherent in this transaction will allow us to continue building on our Q2 success.”

Hardware revenues for the three and six months ended June 30, 2015 increased due to hardware deliveries to an enterprise fleet customer, along with strong government solution sales from Q1 2015. Services and other revenues for the quarter and year to date increased over the prior comparable periods due to implementation projects for government customers.

The Company's total subscriber base remained consistent at 79,500 in Q2 2015 as compared to 79,900 in Q2 2014. However, recurring revenues for the three months ended June 30, 2015 decreased largely from a net reduction of full service commercial subscribers over the prior 12 months, which were replaced by lower margin enterprise and data pump subscribers. As a result, the Company's total ARPU for the three and six months ended June 30, 2015 decreased to $17.71 and $18.33 compared to $18.45 and $18.99 in the prior comparable periods. The Company's focus continues to be on the acquisition and retention of high margin recurring revenue.

Gross margin for the quarter and year to date increased over the prior comparable periods as a result of higher overall revenues. The margin percentage for the quarter increased due to a greater proportion of higher margin hardware revenues delivered during the period, while the margin percentage for the year to date remained in line with the prior comparable period.

Cash operating expenses for the three and six months ended June 30, 2015 decreased 11% and 13% compared to the prior periods, respectively. The $416 decrease in cash operating expenses for the quarter and $1,031 year to date was due to lower headcount and facilities costs as a result of restructuring efforts; this was partially offset by an increase in sales commissions resulting from the revenue performance for the period and consultants for ongoing R&D projects.

The Condensed Interim Consolidated Financial Statements for the three and six months ended June 30, 2015 and the related Management's Discussion and Analysis for the period has been filed on SEDAR atwww.sedar.com, and also on the Company's website at www.webtechwireless.com.

All amounts in Canadian dollars (CAD$) unless otherwise noted. The Toronto Stock Exchange does not accept responsibility for the adequacy or accuracy of this release. Trademarks are the property of their owners.