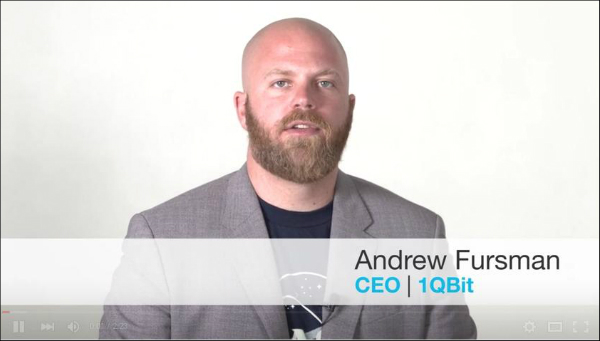 1QBit, which develops software for quantum computers, made it to the selection as the only Canadian company (Image Credit: World Economic Forum)

Vancouver, BC, August 6, 2015--(T-Net)--1QBit, the world's first quantum computing software company, anounced today that it was awarded today as one of the World Economic Forum's “technology pioneers”, a selection of the world's most innovative companies.

1QBit was founded by Andrew Fursman and Landon Downs in Vancouver, BC, Canada and is supported by a strong network of investors including the Chicago Mercantile Exchange, D-Wave Systems, and the Royal Bank of Scotland.

What is a quantum computer exactly? Rather than store information as 0s or 1s as conventional computers do, a quantum computer uses qubits - which can be a 1 or a 0 or both at the same time. This “quantum superposition”, along with the quantum effects of entanglement and quantum tunnelling, enable quantum computers to consider and manipulate all combinations of bits simultaneously, making quantum computation powerful and fast.

Through partnerships with financial, energy and life science companies, 1QBit is demonstrating the power of quantum processors in real-world applications and developing a suite of tools to tackle the most difficult computational problems.

1QBit was chosen by a professional jury among hundreds of candidates as one of only 49 selected companies.

Thanks to this selection, 1QBit will have access to the most influential and sought-after business and political network in the world, and the company reported that it will also be invited to the World Economic Forum's “Summer Davos” in Dalian, China this September, and the January Annual Meeting in Davos.

“We're glad to see a Canadian company make it to the selection,” says Fulvia Montresor, Head of Technology Pioneers at the World Economic Forum. 1QBit is part of a group of entrepreneurs who are more aware of the crucial challenges of the world around them, and who are determined to do their part to solve those challenges with their company.”

The company, founded in 2012, has already assembled a pretty stellar group of employees, management, board and advisors. See their full team listed here.

As in previous years, American-based entrepreneurs continue to dominate the list of technology pioneers: they account for more than two-thirds of the recipients, followed by the United Kingdom (4), Israel and the Netherlands (2), and individual recipients from Canada, Germany, Ireland, Italy, Sweden, and Taiwan.

The Technology Pioneers were selected from among hundreds of applicants by a selection committee of 68 academics, entrepreneurs, venture capitalists, and corporate executives.

Notable members of the committee include Arianna Huffington (founder, Huffington Post) and Henry Blodget (editor-in-chief, Business Insider). The committee based its decisions on criteria including innovation, potential impact, working prototype, viability, and leadership.

1QBit explores new ways to tackle the most difficult computational problems, then applies those techniques to solve real-world challenges by creating software for quantum processors.

About the World Economic Forum

The World Economic Forum is an international institution committed to improving the state of the world through public-private cooperation in the spirit of global citizenship.

It engages with business, political, academic and other leaders of society to shape global, regional and industry agendas. Incorporated as a not-for-profit foundation in 1971 and headquartered in Geneva, Switzerland, the Forum is independent, impartial and not tied to any interests.

It cooperates closely with all leading international organizations (www.weforum.org).