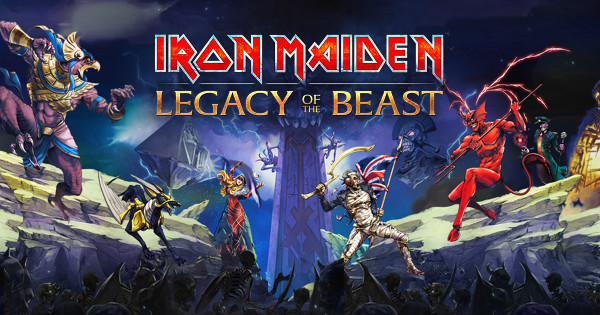 Journey through the Iron Maiden universe in an epic mobile RPG, launching worldwide on iOS and Android this summer

Following a series of hit action sports titles for Red Bull Media House, Warhammer 40,000: Carnage, a Games Workshop ARPG, and Food Battle: The Game for YouTube sensations SMOSH, Roadhouse Interactive's development and publishing divisions have been working hand in hand with Iron Maiden and their Phantom Music Management team, who have granted unparalleled access to the vaults in order to create a truly authentic Iron Maiden game.

“As a lifelong fan, I have always thought that Maiden's music, lyrics and cast of characters would provide the perfect basis for a deep RPG experience”, says James Hursthouse, CEO of Roadhouse Interactive. “With this game we're creating an outstanding RPG that will appeal to all mobile gamers, including those discovering Maiden for the first time.”

Developed in close collaboration with Iron Maiden's management, players take on the role of the band's iconic mascot, Eddie, in his many forms - each with unique abilities. Players explore new worlds, travel through time, and battle a cast of dramatic and engaging characters drawn from the expansive catalogue of Maiden's albums and art. Gameplay is enhanced with a soundtrack using songs spanning the band's entire career, including previously unheard live recordings of Iron Maiden classics adapted for the game by engineer Tony Newton under the close scrutiny of bassist and founding member Steve Harris.

“We know many of our fans are gamers and we have long thought that Eddie and Maiden's music and imagery would be perfect for this. It's something we have been looking at revisiting since Ed Hunter way back in 1999. Now in 2016 it can all be done on a smartphone so it makes it even more accessible for Maiden fans everywhere and also all the gamers out there.” comments Harris.

Band manager Rod Smallwood says, “A game with tons of Maiden history, a load of unheard performances, and a chance to make your own Eddie army thanks to a world class Maiden-mad gaming company - now that's something I'm very excited about and I'm pretty sure our fans will be too. Thank you Roadhouse!”

Phantom Music creative director Llexi Leon adds, “This is the first time we'll see Iron Maiden's lyrical lore and the rich mythology of the record covers brought together in a cohesive universe, exploring Eddie's immortality and inviting players to control his destiny. The band's signature theatrics and musical drama set the tone for a unique adventure that's perfect for video games”

Iron Maiden's latest album, The Book of Souls, was released in September 2015 to popular and critical acclaim, hitting the #1 spot in over 40 countries and reinforcing their position as one of the most relevant and influential bands in music today. This year they will embark on the The Book of Souls World tour and with fan excitement at fever pitch it's the perfect time to expand Iron Maiden's legend into gaming.

Iron Maiden: Legacy of the Beast will be available later this year on iOS and Android platforms. See www.ironmaidenlegacy.com for ongoing releases about the game.

With over 90 million album sales, more than 2000 live performances in 59* countries, tens of millions of fans and 16 studio albums of unerring quality and power to their name, Iron Maiden have more than earned their proudly-held status as one of the most influential and revered bands of all time. In February they will to take to the road and the skies yet again, this time on board a Boeing 747 Jumbo Jet piloted by vocalist Bruce Dickinson and carrying the band, their full crew plus all their massive stage production and equipment. Iron Maiden's 2016 tour will see them playing in six of the seven continents and 34 countries, performing to over 1.5million fans, including first-ever performances in China and El Salvador. The band has recently extended its legacy in a couple of areas of particular interest to them! They now have their own beer,Trooper, widely acknowledged as the most successful international British beer launch of the past twenty years and brewed by family brewers Robinsons in Stockport UK. Secondly Maiden Audio just launched a set of high end on-ear audio headphones, named the ‘Ed-Ph0n3s', in collaboration with award-winning Japanese electronics company Onkyo Corporation. These are specifically designed as the ultimate headphones to hear Rock and Metal and as such are perfect for use with this game. Visit www.ironmaiden.com for more information.

Roadhouse Interactive is a Vancouver-based developer and publisher of mobile games. Roadhouse's management team is responsible for some of the most well-known game franchises of the past twenty-five years and continues to grow industry-leading production, development and live game operations expertise at Roadhouse. Titles include a series of hit action sports titles in partnership with Red Bull Media House (Red Bull Air Race: The Game,Bike Unchained) Food Battle: The Game for YouTube sensations, SMOSH, and Warhammer 40,000: Carnage, an ARPG set in the expansive Warhammer 40,000 universe. Roadhouse Holdings Ltd., along with 50cc, formed Nodding Frog Limited, a UK company, to bring Iron Maiden: Legacy of the Beast to market. Visit www.roadhouseinteractive.com for more information.

50cc is a 21st century gaming collective focused on delivering IP innovation in mobile games. The company was founded in 2014 by Gavin Shackell, Will Moore and Jon Link, who between them have close to a century of senior management experience in the entertainment sector. The team has led projects for global brands including; The Rolling Stones, David Bowie, Coldplay, Iron Maiden, Universal Music Group, Def Jam Enterprises, Live Nation, London 2012 Olympics and the BBC. 50cc recognises that IP holders from the worlds of music, film, television and sport want to engage with their audiences in new and immersive ways. The company is carving a niche as leaders in the creation and financing of compelling new mobile gaming IP with some of the biggest names in entertainment. Visit www.50ccgames.com for more information.