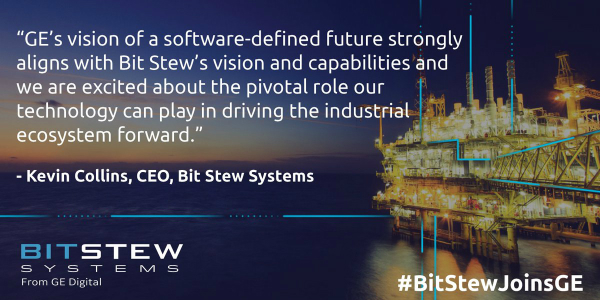 Burnaby, BC, November 16, 2016--(T-Net)--Bit Stew Systems announced today that the company has been acquired by GE Digital (NYSE: GE) bringing its leading data intelligence capabilities to Predix, GE's operating system for the Industrial Internet, and its industrial applications such as Asset Performance Management (APM).

The company has not released the amount or terms of the acquisition, but the Vancouver Sun has reported this as $207.5 million, according to documents they uncovered filed with the Supreme Court of British Columbia.

Editor's Note: Others including the Globe and Mail have also reported the acquisition amount as $153 million (US), which is the same amount after accounting for the current .74 CDN dollar exchange rate).

Bit Stew Systems had just recently announced an initial closing of their Series C financing round of $8.8 million (CDN) earlier this year (in May of 2016) from international syndicate of new and current investors including Yaletown Partners, GE Ventures, BDC Capital and Kensington Capital Partners (with plans to raise a second tranche of an additional $17 million).

The company raised a $20.6 Million (CDN) Series B funding round last year in May of 2015. The Series B round was led by GE Ventures, and included existing investors Cisco Investments and Yaletown Venture Partners plus new investment from BDC Capital and others.

At $207 million (CDN), this is one of the largest acquisitions in recent BC tech industry history.

Bit Stew's MIx Core™ is purpose-built to handle complex data integration and analysis across connected devices, OT and IT systems, and external sources. Unlike conventional ETL tools, MIx Core automates data integration by applying machine intelligence to the process, which can reduce project costs by an average of 90% compared to traditional approaches.

“We are pleased to welcome Bit Stew to the GE Digital family. The integration of our technologies will provide the Predix platform with a greater capability to integrate data while it is in motion from the edge to the cloud,” said Harel Kodesh, CTO at GE Digital. “This combination will help us to accelerate our industrial offerings, providing customers with contextual understanding of their assets and operations.”

Kevin Collins, CEO and Co-Founder at Bit Stew says, “This is an exciting day for Bit Stew as we join the GE Digital family. With this acquisition, Bit Stew gains access to GE's industrial ecosystem, customer base, and deep domain expertise. GE's vision of a software-defined future strongly aligns with Bit Stew's vision and capabilities and we are excited about the pivotal role our technology can play in driving the industrial ecosystem forward.”

In May 2015, GE Ventures led Bit Stew's Series B investment round.

Since that time, GE Digital and Bit Stew have worked together with several large customers to rapidly integrate complex sources of unstructured and structured data.

Bit Stew has approximately 100 employees and is headquartered in Canada with offices in the USA, Australia and Europe. Bit Stew serves customers in the oil & gas, power, aviation and manufacturing industries.

The company reported to T-Net that the company has remained committed to maintaining it offices in Burnaby, and that GE Digital is committed to further expanding it's base in Canada.

"This really helps us broaden our reach into new markets and bring our data intelligence platform to markets. We are looking forward to the pivotal role our people and our technology will play in driving the industrial ecosystem forward" the company stated when asked for the rational behind the acquisition.

The company will likely be rebranded as "Bit Stew, From GE Digital" moving forward.

Additional Information on the Acquisition

Other major acquisitions in the BC Tech industry in the past 12 months include:

T-Net is only aware of three company's that have been acquired for larger amounts in recent history (in past 12 months). PMC-Sierra for $2.5 Billion, Celator for $1.5 Billion, and Point Grey Research for $253 million).

Bit Stew Systems, From GE Digital, provides the premier platform for handling complex data integration, data analysis, and predictive automation for connected devices on the Industrial Internet of Things (IIoT). Purpose-built for the IIoT, Bit Stew's MIx Core™ data intelligence platform solves the data integration challenge at scale for complex industrial data environments. Bit Stew has earned global recognition by being named to Gartner's Cool Vendors List and as Frost & Sullivan's Entrepreneurial Company of the Year - North American Service Solutions. In 2015, Bit Stew was ranked as one of the Top 100 Analytics Companies and Top 100 IoT Startups by Forbes. Incorporated in 2009, Bit Stew has offices in Canada, the USA, Australia and Europe. Visit www.bitstew.com to learn more.