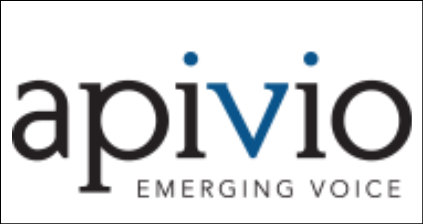 "During the third quarter of the year, we saw a slowdown in the sales from our South Korean telecom customers due to fewer sales promotional activities undertaken compared to the previous two years," said Rob Bakshi, CEO of Apivio Systems Inc. "However, we maintain strong relationships with the largest telecom providers in the country as a trusted, respected and innovative supplier that is well-positioned for future growth in that market. In addition to our efforts in the South Korean market, we continue to make constructive steps towards reaching a definitive agreement with NEC Japan to market and sell Apivio's technology globally."

Continues Mr. Bakshi, "Lastly, earlier in the quarter we announced that TeleDynamics will distribute the company's market-leading Wi-Fi, Android and other VoIP devices in the United States, having made an initial purchase order for 2,000 of Apivio's Liberty L2 Wi-Fi phones. We continue to work on new distribution agreements that will provide us with additional channels to sell our suite of phones."

Apivio Systems Inc. ("Apivio" or the "Company") (TSX VENTURE: APV) is a Canadian technology company principally engaged in the design, development, marketing, and sale of communications equipment and software. It has a wholly-owned Korean subsidiary with a history of supplying VoIP telephone equipment and other products to major Korean and international telecommunications carriers. For more information regarding Apivio, please refer to its respective public filings available at www.sedar.com.