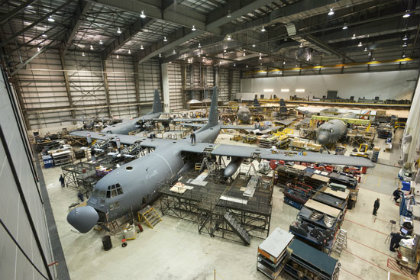 Abbotsford, BC, December 14, 2016--(T-Net)--Cascade Aerospace Inc. recently delivered the final CC-130J to the Royal Canadian Air Force (RCAF) after the entire fleet received the Block 7.0 upgrade. This marks a first for the entire aerospace industry and a first for Cascade as the only non-government organization to complete a production Block upgrade in the global C-130J fleet.

Located in Abbotsford, British Columbia, Cascade Aerospace, North America's only C-130J Heavy Maintenance Centre, is also fully certified and ready to service and maintain aircraft for departments and agencies of the Government of the United States, including the entire C-130 Hercules fleet.

“Capitalizing on our current contracts to maintain and support Canada's CC-130 Hercules fleets as well as the work we have done internationally; we are able to provide the best taxpayer value to modernize the CC-130J's ensuring these aircraft operate to their fullest ability.” said Ben Boehm, Executive Vice President and COO at Cascade Aerospace. “At Cascade Aerospace, with our ISO and Aerospace Standard series quality certifications, we are equally ready to immediately assist U.S. military and civilian agencies as well.”

Cascade Aerospace was able to limit down-time to an average of 35 days per aircraft for the upgrade; which adds 29 enhancements to Canada's CC-130J Hercules. The changes include improvements to navigation, communications, and maintenance capabilities, and allows Canada's Hercules to remain at the forefront in tactical airlift operations.

Mr. Boehm said: “Government departments and agencies can count on Cascade Aerospace to save time, maximize value and enhance capacity for their fleets, including fixed wing search and rescue (SAR) and tactical heavy lift aircraft.”