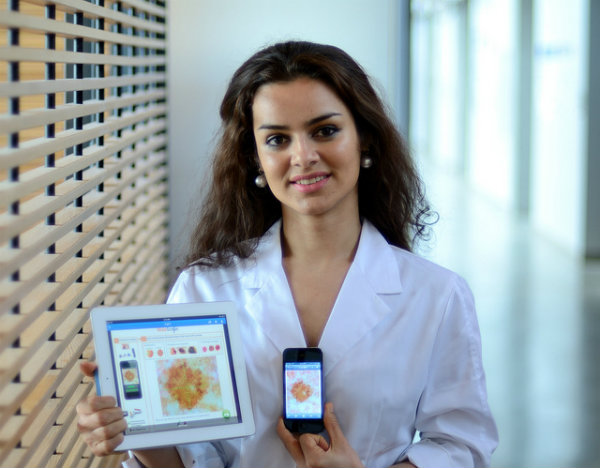 Vancouver, BC, May 2, 2016--(T-Net)--Surrey's RCMP officers and staff have a new safety measure in their arsenal - the DermEngine skin-screening platform created by Simon Fraser University alumna Maryam Sadeghi.

Sadeghi's company, MetaOptima Technology Inc., has been awarded a contract for DermEngine's voluntarily use by Surrey RCMP employees for remote skin screening when working outdoors.

The funding is through the Build in Canada Innovation Program, which helps companies to bridge the pre-commercialization gap by buying and testing late-stage innovative goods and services before heading to market.

“Studies have shown that outdoor workers are at much higher risk of developing skin cancers, and we know that there is a shortage of access to dermatologists in Canada,” says Sadeghi. “This opportunity will help us to provide our cutting-edge solutions for screening and e-triage of skin cancers in high-risk outdoor workers such as RCMP officers.”

Surrey RCMP Superintendent Carol Bradley said the detachment is excited to be part of piloting the emerging technology given its commitment to employee health and wellness.

DermEngine enables smartphone users to quickly and easily check suspicious moles and lesions, using MoleScope™, which comprises a mini-microscope, app and cloud-based platform. It works by capturing and sending images of suspicious moles to medical professionals for further screening.

MoleScope™ is part of MetaOptima's inaugural DermEngine™ product, which was unveiled last June at the World Congress of Dermatology in Vancouver. Sadeghi conceived the innovation as a PhD student as a solution to helping people better manage their health.

Sadeghi says visual changes in skin often signal the potential for skin cancer. It is estimated that individuals and family members catch 70 per cent of skin cancer cases.

“There are also several other chronic skin problems such as eczema, psoriasis and chronic wounds that can also be managed in the DermEngine connected platform that provides access to care providers for patients at ease in their homes,” she says.

MetaOptima grew out of SFU's Venture Connection program and now has 12 full-time employees.

The company has been recognized with several awards, including a 2013 BCIC-New Ventures Prize, and Silicon Valley's Plug & Play prize and SFU's Venture Prize in 2014. The Natural Sciences and Engineering Research Council of Canada (NSERC) also recognized her with a 2012 Innovation Challenge Award.