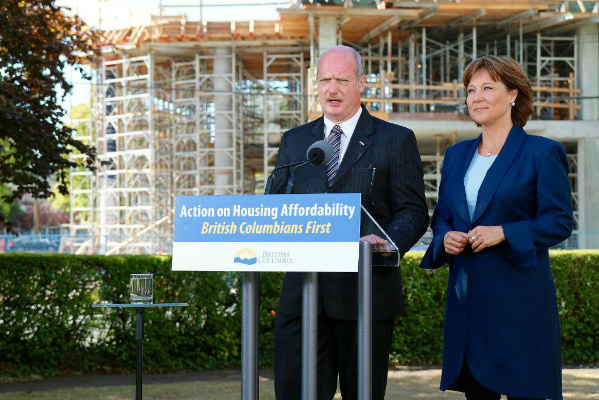 “Owning a home should be accessible to middle-class families, and those who are in a position to rent should be able to find a suitable home,” Premier Christy Clark said. “These changes are about helping to make sure that British Columbians can continue to live, work and raise their families in our vibrant communities.”

An additional property transfer tax rate of 15% will apply to purchasers of residential real estate who are foreign nationals or foreign-controlled corporations. The additional tax will take effect Aug. 2, 2016, and will apply to foreign entities registering their purchase of residential property in Metro Vancouver, excluding the treaty lands of the Tsawwassen First Nation.

For example, the additional tax on the purchase of a home valued at $2 million will amount to $300,000.

Editor's Note: We say - finally! What took so long?

Real estate prices are so obviously out of whack for local residents and local incomes in Metro Vancouver (including the thousands of highly skilled and talented employees in our local BC tech industry), all we can say is finally, and hopefully this will help put a damper on the pretty much insane continuing annual real estate price increases in BC, and lower or reduce the risk of talent erosion of young skilled people to other tech jurisdictions that otherwise might occur, or be worse (and hence why we are covering this announcement in a local tech news and information site).

One other note - why only Metro Vancouver? What happens now to all the other major regions in BC (such as Kelowna, Kamloops, Whistler, Victoria, etc.), which just got 15% (relatively) cheaper to foreign investors? It would be much better in our view to apply this Province wide.

Will we see a flood of new foreign capital now into these other areas of BC as an alternative, for those who want to park their cash in BC (and causing similar problems that Metro Vancouver has already experienced)?

One caveat: Many are arguing (forcefully) also that this tax should not be applied RETROACTIVELY (i.e. to real estate purchases already made, but not yet closed). They argue that "since when can government just create a new tax out of the blue, with no warning, and apply it retroactively"?

This is grossly unfair (and just plain wrong) to people who made their housing purchases in good faith (with one set of ground rules, only to be told they now HAVE to pay 15% more than they anticipated, or otherwise lose their down payments, and perhaps also be sued by sellers if they don't close). Why not instead just apply it only to purchases made after the announcement date (July 25th), and grandfather purchases made before that date, but that may not have closed by the August 2nd date.

BC tech industry affects: The one possible downside to this from a tech industry perspective is the possible additional housing cost for senior executives who are recruited to Vancouver tech companies from outside of BC (should they wish to purchase a home before becoming a Canadian citizen), but if they are coming from the US (which is most likely), they are already likely winning and ahead of the game (compared to local BC residents) with a 30% depreciated Canadian dollar (and real estate prices in the GVRD may also fall as a result of the tax as well).

For mixed-use property, the additional tax would apply on the residential component (only) of the foreign interest in a property.

Our view: If we are going to have a tax on real estate purchases by foreigners or non-Canadian citizens, then apply it (a) Province-wide, and (b) on all types of real estate (not just residential in GVRD), and stop trying to pick winners and losers (by either area or type of real estate). Just apply the same tax fairly across the board (and not retroactively) and have a level playing field.

“The data we started collecting earlier this summer is showing that foreign nationals invested more than $1 billion into B.C. property between June 10 and July 14, more than 86% of it in the Lower Mainland,” said Finance Minister Michael de Jong. “While investment from outside Canada is only one factor driving price increases, it represents an additional source of pressure on a market struggling to build enough new homes to keep up. This additional tax on foreign purchases will help manage foreign demand while new homes are built to meet local needs.”

Second, the government is creating a new Housing Priority Initiatives Fund for provincial housing and rental programs, which will be announced in the near future. The fund will receive an initial investment of $75 million. It will receive a portion of revenues from the property transfer tax, including revenues from the new additional tax on foreign buyers.

Third, the Province is amending the Real Estate Services Act to substantially implement the key recommendations of the independent advisory group report, and to end self-regulation of the real estate industry. Government has accepted all the recommendations in the report. These changes will increase significantly the superintendent of real estate's authority and oversight.

The power to make the rules that apply to the conduct of licensees will rest with the new superintendent of real estate instead of with council. The new superintendent will also have the authority to direct and oversee council operations, including requiring council to investigate a particular matter, issue a notice of a disciplinary hearing, and provide reports on the operations and activities of council to the superintendent. As well, the chair, vice-chair and all other members of the council will be appointed by government.

“We need to ensure that when people are ready to make such an important investment, the proper protections and oversight are in place,” said de Jong. “Consumers must be confident their interests are held above all else.”

Fourth, amendments to the Vancouver Charter provide the legislative authority for the city to implement and administer a tax on vacant homes. The City of Vancouver will design the framework of the vacancy tax, including details like the tax rate, when it will apply and any necessary exemptions.

“The issue of housing supply and affordability is impacting British Columbians and the livability of our Province, especially the Metro Vancouver region,” said Minister Peter Fassbender. “The City of Vancouver has identified the need for a vacancy tax in order to meet rental supply issues. We are taking action by introducing legislation today that enables them to do this work.”

The Province is working on additional measures to address the complex causes of rising housing prices in Metro Vancouver, as well as other regions of the province. This work focuses on ensuring the dream of home ownership remains within the reach of the middle class, increasing housing supply, smart transit expansion, supporting first-time home buyers, strengthening consumer protection and increasing rental supply.

Visit to learn more about the Province's actions on housing affordability:http://gov.bc.ca/housingaffordability