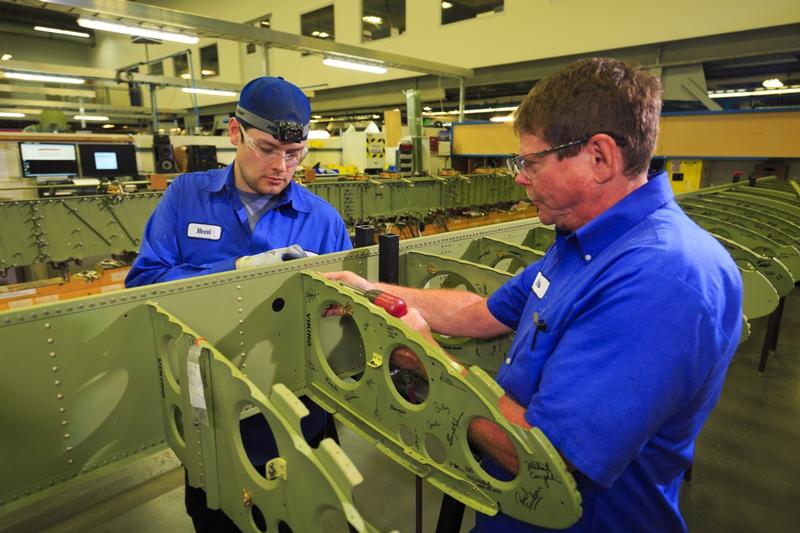 Victoria, BC, July 28, 2016--(T-Net)--Viking Air Limited of Victoria, British Columbia, has disclosed that its 100th production Series 400 Twin Otter, serial number 944, has now flown from its production facilities as part of the completion process in advance of delivery to Viking's sister company Pacific Sky Aviation Inc.

The aircraft will be utilized as a factory demonstrator, and represents a significant milestone for the Series 400 Twin Otter production program.

Originally launched in March 2007, the Viking Twin Otter production program was a natural progression after Viking acquired the Type Certificates for the legacy de Havilland aircraft fleet (DHC-1 through the DHC-7) in February 2006.

The decision to launch the Series 400 was made after a market study, supported by the worldwide Twin Otter operator group, revealed a strong demand for the new platform to replace the aging legacy fleet.

“When I take a moment to reflect on the Series 400 program from the original launch to completion of our 100th aircraft, and all the challenges we have overcome in between, I am truly amazed at what the Viking team has accomplished,” commented David Curtis, Viking president & CEO. “While there was doubt that a relatively unknown aerospace manufacturing company on the west coast of Canada would be up to the task, here we are, 100 production aircraft later.”

The Series 400 program got off the ground on February 16th 2010, when the company's first production aircraft completed its inaugural flight from Viking's final aircraft assembly facility in Calgary, Alberta, and four months later, on June 24th, 2010, Transport Canada issued Series 400 Type Certification. The global reach of the Series 400 Twin Otter has been proven with new aircraft operated in 29 countries. With the 100th Series 400, Viking has recorded deliveries to 34 distinctive customers.

Headquartered in Victoria, BC, Viking is the global leader in utility aircraft support and services, and the manufacturer of the world-renowned Series 400 Twin Otter. Viking is the Original Type Certificate holder for all out-of-production de Havilland aircraft, from the DHC-1 Chipmunk through the DHC-7 DASH-7 50-passenger STOL regional airliner, and provides exclusive spare parts manufacturing for the legacy de Havilland fleet.

In June 2016 Viking entered into an agreement to acquire Bombardier's amphibious aircraft program, including the Bombardier CL-415 water bomber and its variants, as well as the earlier CL-215 and CL-215T versions. The acquisition includes the Type Certificates (manufacturing rights) for all variants of the aircraft and Viking will also assume responsibility for product support, parts and service for the fleet of 170 water bombers in service around the world. The transaction is expected to close before fall 2016.