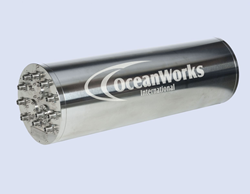 ...the OceanWorks SIIM design has been validated by its 10 plus years of continuous operation on both the VENUS and NEPTUNE Ocean Observatories...

...SIIMs to be delivered by OceanWorks International to Ocean Networks Canada to increase the capability of the NEPTUNE observatory in providing Earthquake Early Warning detection...

Vancouver, BC, July 29, 2016--(T-Net)--OceanWorks International announced that it will deliver 3 of its Subsea Instrument Interface Modules (SIIM), commonly referred to as “Junction Box”, to Ocean Network Canada in 2016.

The SIIM will be deployed to augment those already comprising a substantial portion of the NEPTUNE cabled observatory deployed in the Pacific Ocean off the west coast of British Columbia, Canada.

Ocean Networks Canada (ONC), an initiative of the University of Victoria, is an international facility that operates the world-leading NEPTUNE and VENUS ocean observatories and community observatories along British Columbia's coast and in the Arctic.

VENUS was designed and manufactured by OceanWorks International. For more information visithttp://www.oceannetworks.ca.

This recent order for the OceanWorks designed and built Subsea Instrument Interface Modules (SIIM) is in keeping with the British Columbia Government's aim to increase the capability of the NEPTUNE observatory in providing the Province with Earthquake Early Warning detection.

The NEPTUNE observatory has over 850km of cable with hundreds of ocean sensors connected to the SIIMs. The SIIM is the primary science interface and is immediately available once connected to the Node with data going from instruments to the SIIM, then to the Node, and from there to anywhere in the world in real-time via Internet access from the shore station.

Each SIIM can support up to 10 individual instrument interfaces using a variety of Ethernet or serial communication links. The SIIM supplies up to 2000W of power to each instrument in a variety of voltages to allow for maximum configurability to suit the requirements of the attached instrument. Each SIIM can also switch supply up to 6kW at 400V for high power loads. The SIIM connects to any one of the 5 nodes on the NEPTUNE observatory and allows instruments to be placed in the region of interest and at depths up to 3000m or greater.

OceanWorks is pleased to support ONC in strengthening its Earthquake early detection and warning capabilities.

OceanWorks International is a subsea solution engineering company, providing over 20 years of service to the Scientific & Environmental, Oil & Gas, and Military markets. Offering a full range of subsea system engineering, design and analysis, fabrication, testing, and project management services, OceanWorks has been at the cutting edge of subsea engineering design, deep submergence and diving technology, operations, and support and we look forward to providing subsea engineering solutions to our customers for years to come.

For more information regarding OceanWorks International's products and services visit our website, http://www.oceanworks.com , or contact us at marketing(at)oceanworks(dot)com.