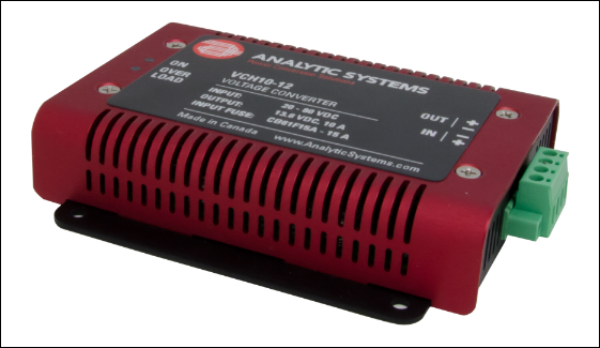 Vancouver, BC, August 18, 2016--(T-Net)--Analytic Systems announced it has introduced a new VCH10 series of Step- Down DC-DC Voltage Converters.

These high frequency (over 100 KHz) switching buck converters can convert up to 80 volts DC down to a variety of lesser voltages including 12, 24, 28, 32, 36 and 48 volts DC, each with a 10 amp output capability. All surface mount high frequency design offers higher reliability, higher efficiency (more than 92%), more power (up to 544 watts at 48 VDC Out) and minimum size.

The VCH10 Step-Down Voltage Converter series are suitable for use in the automotive, heavy equipment, marine, industrial, rail or alternative energy environments. The VCH10 series replaces the VTC90 series.

The VCH10W takes the same compact and robust circuitry and packages it in an IP66 rated watertight and EMC shielded enclosure for use in rugged environments. The standard connection is a single pigtail cable fitted with an automotive style Deutsch connector, with alternate connections available by special request. The VCH10W series replaces the VTC70 series.

The VCH10MW is rated for operation from -40 to +55 degrees C and has been tested and confirmed to meet MIL-STD-461F for radiated and conducted emissions. It is designed to meet MIL-STD-810G for shock and vibration. The BCH10MW series replaces the VTC70MS series.

The VCH10 (all versions) is available in both standard leaded manufacture and RoHS lead free manufacture for the EU marketplace.

Analytic Systems has been building voltage converters, inverters, power supplies and battery chargers for the Marine, Military, Industrial, Telecom and Transportation markets since 1976. Based in Greater Vancouver, British Columbia, Analytic Systems manufactures all its products in house, keeping jobs and creating quality in North America.