This announcement comes as LlamaZOO Interactive has been selected by Microsoft as a "first wave" developer for its new Hololens augmented reality platform, and continues to demonstrate how 3D can be used in education.

EasyAnatomy borrows strategies from cognitive neuroscience to update course materials, in real time, according to the needs of the learner. By analyzing student performance to create individualized quizzes so that studying is more efficient. 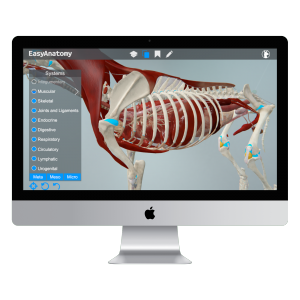 "EasyAnatomy is a truly innovative EdTech software product that promises to revolutionize post-secondary education for both students and educators, for a variety of subjects" said LlamaZOO co-founder and CEO Charles Lavigne.

"Students can now study the complexities of animal anatomy in 3D, online, anywhere and at any time. With the early promise of how virtual and augmented reality can benefit education, we're excited to continue to advance the product and innovate in the space.”

The University of Pennsylvania, home of the oldest medical school in North America and the Western College of Veterinary Medicine, also one of the oldest school of its kind in Canada, will provide their students and faculty with EasyAnatomy. The software incorporates MRI and CT scans into its detailed 3D models of animal anatomy that can be interacted with anyone with an online subscription.

"Anatomy has always been a difficult subject to learn and teach. EasyAnatomy is a novel tool that allows students to explore and understand anatomy in a way that's never been possible before," says Dr. Chris Clark, an Associate Dean at Western College of Veterinary Medicine. "We're excited students and faculty can take advantage of this revolutionary software."

"We're really excited that two of the oldest and most prestigious medical and veterinary schools in North America have decided to adopt EasyAnatomy," said Kevin Oke, LlamaZOO Interactive co-founder and Vice President of Sales. "These two new customers, plus the prestige of being selected as a developer for Microsoft's new Hololens project, provide strong validation of how EasyAnatomy promises to transform post-secondary learning. We will continue to refine, develop and add value to EasyAnatomy going forward."

LlamaZOO Interactive was co-founded in 2014 by video game industry veterans Charles Lavigne and Kevin Oke, and was quickly accepted in the VIATEC Accelerator program that fosters successful technology startups in Victoria, BC. The company continues to grow at a rapid pace and is currently recruiting developers for a number of positions, with the intent on delivering highly engaging, interactive, and meaningful educational content to iOS/Android, Augmented, Virtual, and Mixed reality devices.