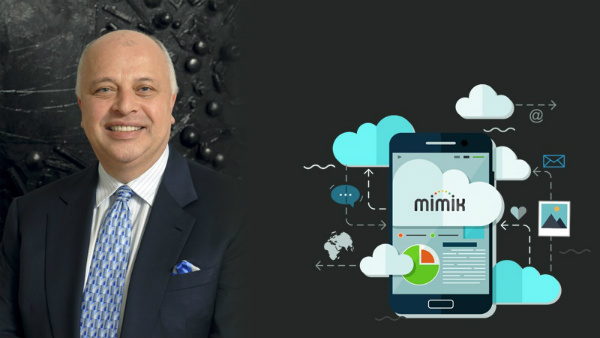 Vancouver, BC, September 12, 2016--(T-Net)--mimik technology, a company dedicated to distributed micro-cloud and micro-service technology, announced the appointment of industry heavyweight Allen Salmasi to its board of directors.

“We are excited to have Allen join the mimik team,” stated Siavash Alamouti, President and Chief Executive Officer. Allen is an internationally recognized technologist, distinguished leader, serial entrepreneur and successful investor in the communications, SaaS and pharmaceutical industries. His entire carrier has been focused on cutting edge technologies with founding and leadership roles in impactful companies like Omninet, Qualcomm, NextWave, and PacketVideo, and startups like OncoSynergy, Virtuosys and Max2 to name a few. He shares our vision of digital freedom and putting people in direct control of their digital lives. I'm confident that his experience as a cutting edge technology entrepreneur and diverse background across industries will add tremendous value in deploying and scaling our distributed micro-cloud technology platform globally in order to revolutionize the way we communicate and put people in control of their digital lives."

Mr. Salmasi commented, “I'm most excited to be joining the mimik Board of Directors and support their impressive team with a game changing technology platform. mimik platform can revolutionize our digital lives which today is fragmented across incompatible networks and operating systems. mimik utilizes the power of any computing device to form an edge based distributed micro-cloud enabling incompatible devices to communicate seamlessly through micro-services. mimik access, as the first application of the platform already addresses many pain points of the casual users and exhibits the power of the platform which I believe will become even more crucial with internet of things. I'll be working with the executive team and the Board to help the company roll out this unique technology globally and across different industry sectors.”

Allen Salmasi is currently Chairman and CEO of NLabs Inc., a New York-based venture capital firm. Prior to NLabs, he served as chairman and CEO of NextWave Wireless Inc. (NWI), a company he formed in 2005 that was subsequently acquired by AT&T in 2013. NWI was spun-off from NextWave Telecom Inc. (NTI), a company he had founded in 1995 which was acquired by Verizon Wireless in 2005.

Prior to NextWave, Mr. Salmasi was a member of the Board of Directors, President of the Wireless Communications Division, and Chief Strategic Officer of QUALCOMM Inc. between 1988 and 1995. He initiated and led the development of wireless business, including chipset and handset products, licensing and standards programs for CDMA technology. Prior to QUALCOMM, at Omninet Corporation, a company he founded in 1984 and served as its Chairman of the Board and CEO, he envisioned and led the development of the OmniTRACS system and service, the world's first and currently the largest commercial terrestrial mobile satellite communications service. From 1979 to 1984, Mr. Salmasi was employed by the National Aeronautics and Space Administration (NASA) at Jet Propulsion Laboratory (JPL).

mimik has pioneered a distributed micro-cloud technology that enables devices to create clusters by physically discovering and establishing peer to peer connection between one another. The technology allows discovering micro-services running on any cluster and enabling micro-service level communication. This unique capability enables ad-hoc and real-time formation of mesh networks across different devices, OS, and networks. mimik offers its platform to third-party developers via SDKs and APIs to enrich the experience for consumer, connected home, automotive, health and other vertical applications.