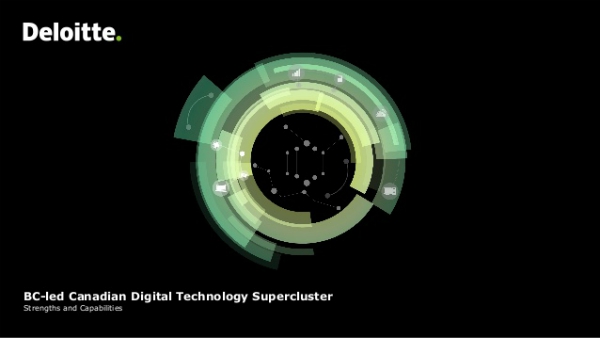 Vancouver, BC, October 13, 2017--(T-Net)--The BC Tech Association announced today that the British Columbia-led Canadian Digital Supercluster consortium has been shortlisted to phase two of the application process for funding through the federal government's Innovation Superclusters Initiative.

This past July, the consortium submitted a proposal to Innovation, Science and Economic Development Canada.

With more than 50 national applicants, only nine were selected across Canada.

Starting in 2018, the federal government will make investments of up to $950 million over five years to support business-led innovation superclusters that generate real economic impact and industrial benefits for Canada.

The collaborative effort of the consortium has been exemplary with national corporate and industry leaders sharing a vision to position Canada as a global digital technology leader.

The consortium will leverage Canada's strengths in data collection, analytics and visualization technologies across industries including natural resources, healthcare, transportation, and more.

British Columbia has a strong foundation that will accelerate Canada's digital economy and propel our competitive advantage for years to come. and lead to long-term developments and innovations on a national and global level that will support economic growth, according to the association.

"BC is the home of leading and emerging digital economy organizations that are positioning Canada as a global innovation leader,” says Josh Blair, Executive Vice President, TELUS Health and TELUS Business Solutions West. We are proud to be partnering with digital leaders across the private sector, academia and the not-for-profit sector to bring forward a national initiative that can deliver major economic, employment and social benefits across multiple industry verticals such as healthcare, bioscience, environmental technology, smart cities and digital media."

"With the augmented and virtual reality market expected to exceed $100 billion by 2025, Vancouver is poised to become a world-class hub for digital media and entertainment innovation,” said Brad Smith, President of Microsoft Corp. As a founding member of the British Columbia Digital Technology Supercluster, Microsoft Corp. is committed to Canada and excited to be a part of this effort"


“Quantum computing provides an entirely new way to process massive amounts of data to solve critical problems in healthcare, finance, national defense and the environment. As the first company to develop a commercial quantum computer, D-Wave has been at the forefront of an emerging quantum technology ecosystem in BC that will help Canada lead the world in quantum computing,” says Vern Brownell, CEO of D-Wave Systems.

“It's been a transformative experience being a BC-based startup and building capabilities that allow us to help companies garner the use of data,” says Dr. Paul Terry, Chief Innovation Officer, PHEMI Systems Corporation. “Further support can create opportunities to scale at a larger level and provide access to more customers and technological adoption.”

The BC consortium has also commissioned a report with Deloitte entitled British Columbia's Digital Technology Supercluster. With BC having the fastest-growing tech sector in Canada, world-class creative and digital media talent, a data-driven global center of excellence in the Internet of Things, BC is well positioned to capitalize on the goals of the supercluster initiative by leveraging these strengths, according to the consortium.

Readers can review the full report on SlideShare or download it here.

The BC-led Canadian Digital Supercluster consortium, led by companies including TELUS,Microsoft Corp., Teck, TimberWest, LifeLabs and Avcorp in collaboration with BC's leading post-secondary institutions and non-profit organizations including the BC Tech Association, Business Council of BC, LifeSciences BC, Premier's Technology Council,Wavefront and the Research University's Council of BC, is a collaborative effort to position Canada as a global leader in digital technology innovations.

Each organization brings forward expertise in data collection, analytics and visualization that can be directly applied to leading industry applications including natural resources, environment, healthcare, agriculture, infrastructure and transportation. Together, the consortium is committed to leveraging BC's foundational strengths in digital technology to innovate and transform traditional industries in Canada and the world.