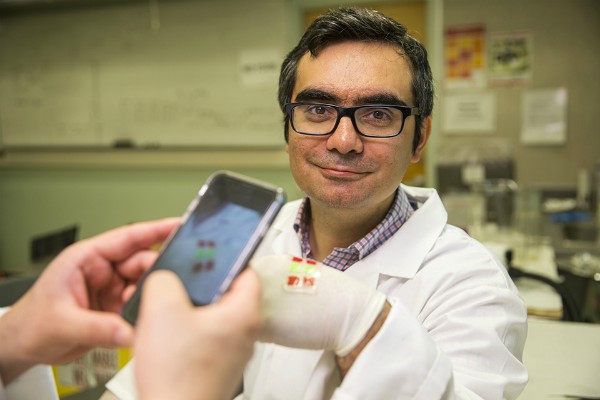 Akbari holding the prototype bandage with sensors that works in concert with a smartphone app. Credit: UVic Photo Services

Vancouver, BC, October 18, 2017--(T-Net)--A “smart bandage” that detects and treats infection using a smartphone app has the potential for transformative advances in wound care, according to University of Victoria bioengineer Mohsen Akbari. He is the principal investigator of a study published this week in an international journal which describes the science behind the innovation.

Akbari and his UVic-based research team with collaborators from Harvard Medical School and UBC, are working with UVic Industry Partnerships to commercialize GelDerm, a patent-pending bandage that monitors pH levels at wound sites to detect the earliest signs of bacterial infection.

A patient using GelDerm will be able to scan over the bandage's embedded sensors with a smartphone app to gauge whether infection has set in. The information can be used for self-monitoring and can be relayed wirelessly to a patient's healthcare team for follow-up. Should antibiotics be required to treat an incipient infection, they can be administered directly through the bandage without having to remove it.

“There is a pressing need to develop advanced dressings that are capable of monitoring wound conditions and providing proper treatment when necessary,” says Akbari, whose bandage was featured on the cover of Advanced Health Care Materials this week. “The proposed technology holds great promise in managing chronic and acute injuries caused by trauma, surgery or diabetes.”

Skin is the largest organ in the body, and an important barrier against bacteria and other pathogens. GelDerm's proven ability to spot infection through changes in pH levels and localize antibiotic treatment at the wound site means potentially life-threatening infection is identified and treated quickly.

While electronics-based approaches to wound care are already being developed by several researchers around the world, Akbari says GelDerm is the first that functions without a power source and whose readings aren't compromised by the multitude of substances that leak from a wound. Akbari anticipates the bandage could be on the market within five years once industry partners have been identified.

Akbari notes that wound management is a major health challenge around the world that racks up significant public expenditures. A 2016 report from the World Health Organization found that in the US alone, infections at surgical incision sites result in more than 400,000 extra days in hospital for patients each year, at a cost of almost USD 1 billion.

“This all-in-one bandage that detects infection and administers treatment without having to be removed will reduce costs and save lives,” says Akbari. GelDerm's ability to administer antibiotics directly at the wound site rather than through a general course of medication also reduces problems of antibiotic overuse, such as the growth in drug-resistant “superbugs” that now kill 10 million people annually.

The research was funded by the Canadian Institutes for Health Research and Canadian Foundation for Innovation. Collaborators include Dr. Aziz Ghahary of the University of British Columbia and Yu Shrike Zhang at Harvard Medical School's Brigham and Women's Hospital, as well as UVic's Bahram Mirani (lead author) and others working in the Centre for Advanced Materials and Related Technology, the Centre for Biomedical Research, and Akbari's own lab, the Laboratory for Innovations in Microengineering.