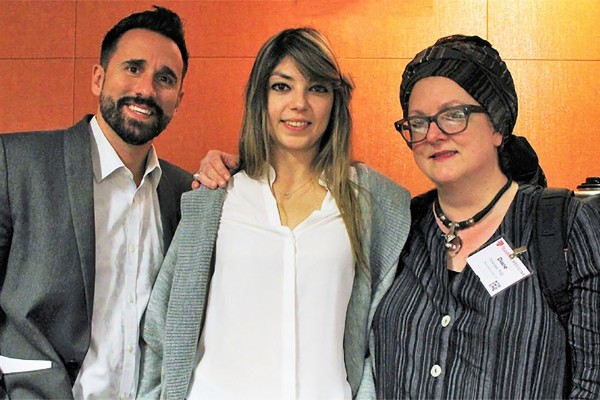 SFU professors Faranak Farzan from the School of Mechatronic Systems Engineering (centre) and Diane Gromala and Sylvain Moreno from the School of Interactive Arts and Technology are collaborating to see how Virtual Reality may play a role in helping to assess and treat addiction.

Professors Faranak Farzan, Sylvain Moreno and Diane Gromala from SFU Surrey have combined their expertise across the disciplines of engineering, neuroscience, wearable technology, and health technology innovations to address the issue of addiction recovery.

They were among six teams invited to pitch at the Shark-Tank-like event after being shortlisted from more than 30 entries. They were awarded the grand prize, as voted by judges from diverse backgrounds encompassing medicine, business and technology innovation.

Stanford, recently named for the third year the world's most innovative university (by United Press International), held the competition as part of its annual Innovations in Psychiatry and Behavioral Health conference, on the theme of Virtual Reality and Behavior Change. The event focused on how virtual and augmented reality technologies are transforming lives, and this year focused on possibilities in mental health care.

Moreno is director of SFU's Digital Health Hub and leads innovation in several national initiatives. Farzan is the inaugural Chair in Technology Innovations for Youth Addiction Recovery and Mental Health.

Together they hope to design a VR-based program that can assess participants' progress in overcoming addiction. 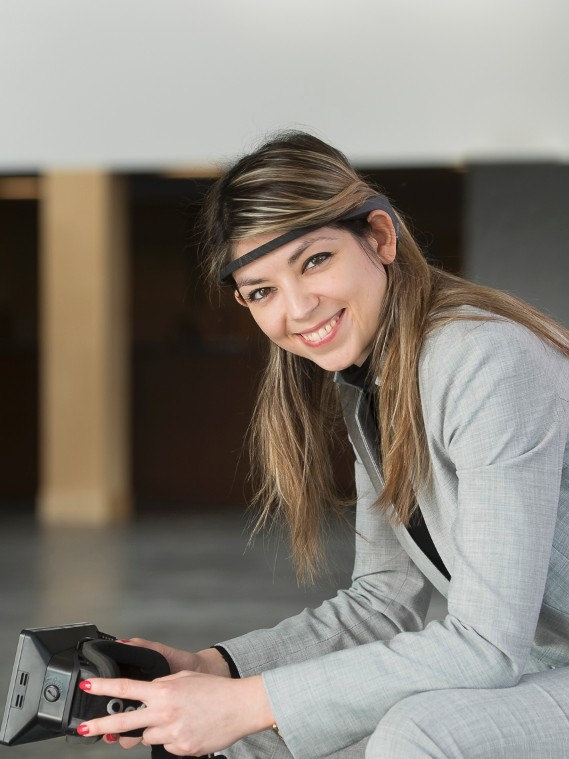 Still in the early stages of research, the team is investigating whether bio- and neuro- sensors connected to a VR system could transform the system into an assessment tool for determining triggers and the potential for relapse.

The project is being implemented at John Volken Academy in Surrey. The academy offers a two-year residential program for young people aged 18-35. A key issue is that they later can find themselves facing environments that may trigger addictive behavior or relapse.

The researchers also hope to see if such a system may have a role in intervening, by helping patients prepare to confront triggers. In each case the VR would help researchers better understand how the brain works when patients are in a vulnerable state.

“It makes sense to create an assessment to see how they are doing, and to see how they might react if we expose them to a scenario that would have previously made them vulnerable,” says Farzan, who is leading the project as part of her involvement with the City of Surrey's Youth Mental Health Initiative.

Gromala, a pioneer in the use of VR for chronic pain management, adds: “We know that VR is an exceptional tool for treating many kinds of psychological disorders, from phobias to post-traumatic stress disorder (PTSD). Recent advances in neuroscience means we can create even more effective VR systems that may help with our current opioid crisis.”

SFU's School of Interactive Arts and Technology had one of the largest contingents of researchers featuring VR projects at the Stanford event; among them, SIAT professors Steve DiPaola, Bernhard Riecke and Chris Shaw, graduate students Alex Kitson, Denise Quesnel and Ozge Yalcin and undergrads Henry Lo and Kathryn Cruz.

The collaboration between SIAT's Gromala and Moreno, and Farzan, a professor in the School of Mechatronic Systems Engineering, highlights the collaborative nature of the Surrey campus, says Steve Dooley, campus executive director.

He says: “We're all proud of the success this team has garnered, and how their work and passion exemplifies how we collaborate and innovate here at the Surrey campus.”