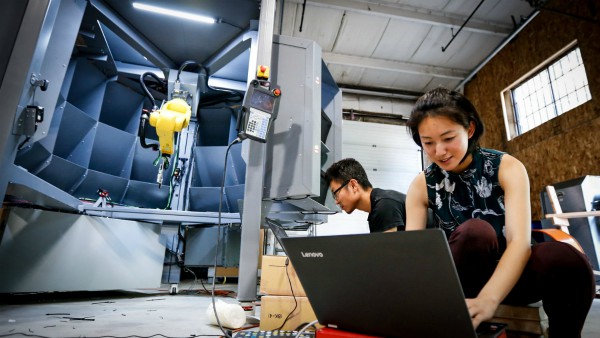 Kindred also announced it raised $35 million (US $28 million) in Series B funding led by Tencent, bringing the total amount raised to $56.7 million (US $44 million). Previous investors Eclipse Ventures and First Round Capital participated in the new round.

Kindred's team of scientists are exploring new types of cognitive architectures that can make any machine smarter.

The company is focused on uncovering how brains learn through a physical body, and applying those learnings to create and teach a new intelligent class of robots that will enhance the quality of our day-to-day lives, and in particular, the way we work.

The additional capital will go towards the continued research, development and deployment of Kindred's robots as a service. The new funds will also be used to advance the company's broader mission to build human-like intelligence in machines.

Kindred Sort was developed for use in retail distribution and ecommerce fulfillment centers to quickly and accurately sort an endless variety of products into orders, side by side with warehouse staff. The robots will help retailers increase productivity and expand capacity to serve more customers faster, enabling top line revenue growth.

“Kindred Sort is only the beginning when it comes to showcasing the company's unique approach to AI,” said Pierre Lamond, Partner at Eclipse Ventures. “Their technology is powering a new class of robots that learn to do far more than traditional industrial robots. These intelligent robots complement human workers to meet the greater efficiency, flexibility and output demands of modern ecommerce fulfillment centers.”

With Kindred Sort, the company aims to alleviate the massive pressures facing the retail and fulfillment industry, which includes significant online sales growth, labor shortages, and a lack of advancement in technology. Though overall employment in fulfillment centers grew by more than 6 percent last year, employers struggle to fill an increasing number of open positions. Kindred Sort allows retailers to more efficiently manage the exploding growth and demand of this sector.

“Industrial robots, despite their accuracy and precision in the controlled environments of modern manufacturing facilities, do not adapt well to less controlled environments where the items could be randomly placed or come in a nearly infinite variety of sizes, shapes and weights,“ said George Babu, co-founder and head of product at Kindred. “Kindred Sort leverages our advancements in applying artificial intelligence (AI) to physical world systems and our unique approach to delivering intelligence to robots that can help solve the capacity issues facing modern fulfillment centers.”

“In the future, all machines will benefit from being able to understand and interact intelligently with the world around them, and Kindred is on the forefront of creating the building blocks for this future,” said Babu.

Editor's Note: Kindred is a pretty secretive and under the radar company, to say the least. Here are at least a few things we currently know:

Some fascinating and worthwhile background reading on Kindred for those interested....

Kindred Systems Inc.'s mission is to build machines with human-like intelligence. The company's central thesis is that intelligence requires a body. Since its founding in 2014, Kindred has been exploring and engineering systems that enable robots to understand and participate in our world, with the ultimate goal of a future where intelligent machines work together with people to create abundance shared by all. Kindred has offices in San Francisco, Toronto, and Vancouver.