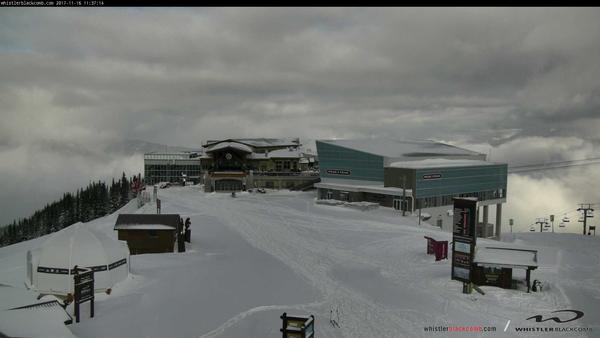 Whistler, BC, November 17, 2017--(T-Net)--Hey - this is not strictly tech related obviously, but are days like today not why we live in Vancouver and put up with all the crazy housing prices, the long winter rainy seasons, the terrible commutes (for some) etc etc???

Where else can you drive 1.5 hours and be skiing or boarding at the best two side by side mountains in all of North America? And then maybe come back and hit the seawall in the same day. And then hit downtown (which is rapidly becoming like our own mini version of New York). We're just sayin'....

For winter sports fans (like us), you'll be excited to hear that Whistler Blackcomb has reported an epic dump of 4 feet of new snow in 48 hours late this week, and over 6 feet in the past week.

They are opening with a crazy good and amazing 168 cm base which is about the best opening day base we can ever remember at T-Net, in years (actually sounds a little too good to be fully true).

So - for those of you not lucky enough to head up today (Friday), you better get them ski's and boards out and waxed tonight, because it's on!

And we know you are out there, in every nook and cranny of BC tech land, probably checking out the Web Cams and the Snow Report, and getting psyched

The official Whistler Blackcomb news release for the early opening is down below.

Whistler Blackcomb will be opening six days ahead of schedule on Friday, November 17. A streak of cold temperatures allowed for prime snowmaking conditions and with a favourable weather forecast calling for 50 centimetres of snow in the next three days, the decision to open Whistler Mountain was made.

“We couldn't be more excited about opening Whistler Mountain early again this season. Our snowmaking and operations teams have been working extremely hard to get the mountain ready for guests,” says Pete Sonntag, Senior Vice President and Chief Operating Officer at Whistler Blackcomb. “Their efforts, along with the natural snowfall we are expecting throughout the week made our decision to open early easy.”

When Whistler Mountain opens on November 17, it will have five lifts in operation, including the Whistler Village Gondola, the Creekside Gondola, Emerald Express, Big Red Express and Franz's Chair. Skiers and Riders will be able to access 20 runs or 600 acres of terrain with a base of one metre at our weather station at Pig Alley. Blackcomb Mountain will open, as scheduled, on Thursday, November 23, 2017.

“With all the excitement of opening day, we want to remind guests early season conditions will apply, especially off piste,” says Doug MacFarlane, Senior Director of Mountain Operations. “It is important to obey all mountain signage, ski and ride on open runs only and stay within the operational area marked by boundary signage.”

Beginning November 16, Whistler Blackcomb's Snow Report will be updated daily throughout the season and can be accessed online or by calling 604-932-4211 in Whistler, 604-687-7507 in Vancouver, or toll-free at 1-800-766-0449. More details about what guests can expect on opening day will be updated daily online.

Sunday, Nov. 19 marks the final day to purchase a 2017-2018 Epic Pass, saving more than 40 percent compared to lift ticket window prices. Ski unlimited and unrestricted from opening day to closing day for only $899. The Epic Pass offers unlimited, unrestricted skiing and pays for itself in just over four days. Enjoy full access to Vail, Beaver Creek, Breckenridge, Keystone and Arapahoe Basin in Colorado; Park City in Utah; Heavenly, Northstar and Kirkwood at Lake Tahoe; Stowe Mountain Resort in Vermont; Afton Alps in Minnesota; Mt. Brighton in Michigan; Wilmot Mountain in Wisconsin; Whistler Blackcomb in Canada; and Perisher in Australia for the 2018 season. The Epic Pass grants limited access to Les 3 Vallées, Paradiski and Tignes-Val D'Isere in France; 4 Vallées in Switzerland; Arlberg in Austria and Skirama Dolomiti in Italy. A child pass (ages five to 12) is $469. Where will a pass take you this season? During the first 30 days alone, your pass unlocks special pass holder discounts on rentals and lodging, events, and weather updates so you know when and where the best snow is falling. Plus, it gets you all the powder days you could hope for. Follow Epic Pass on Facebook for updates throughout the season and look for #First30 news and information.

To book a trip to the No. 1 rated mountain resort in North America visit www.whistlerblackcomb.com/purchase/deals-packages or call 1-888-403-4727.

Whistler Blackcomb, the official alpine skiing venue for the 2010 Olympic and Paralympic Winter Games, is situated in the Resort Municipality of Whistler located in the Coast Mountains of British Columbia 125 kilometres (78 miles) from Vancouver, British Columbia. Whistler and Blackcomb are two side-by-side mountains which, combined, offer over 200 marked runs, 8,171 acres of terrain, 16 alpine bowls, three glaciers, receive on average 1,170 centimetres (461 inches) of snow annually, have one of the longest ski seasons in North America, and are a part of the premier mountain resort network, Vail Resorts. In the summer, Whistler Blackcomb offers a variety of activities, including hiking and biking trails, the Whistler Mountain Bike Park, and sightseeing on the PEAK 2 PEAK Gondola.