Burnaby, BC, December 11, 2017--(T-Net)--BCIT announced this week that it has collaborated with Gundersen Health to advance energy independence.

Gundersen Health is a physician-led, not-for-profit healthcare system based in Wisconsin. In 2014, it achieved 100 percent energy independence—no small feat in a system with six hospitals (including a teaching hospital with 325 beds and a Level II trauma centre), and more than 50 clinics.

With 1 billion dollars in annual revenues, and more than 7,000 employees, their scale is different, but they share a vision and culture similar to BCIT.

Inspired by what they saw accomplished at Gundersen Health, and under the leadership of the BCIT School of Construction and the Environment, BCIT invited Corey Zarecki, Director of Engineering and Operations at Envision, Gundersen Health System, to bring the Gundersen story to BC.

Says BCIT's Zero Emissions Buildings Manager Alexandre Hebert, “In the BCIT Factor Four Area we reduced our energy consumption and GHG emissions by more than 50 percent. We will offset the rest by producing our own energy from our own clean and renewable source: our biomass facility.”

Gundersen Health followed a very similar model, first reducing their energy consumption by 60 percent, then offsetting the rest with biomass, wind, bio-gas, and solar—all the stuff our students learn and dream about.

“What Gundersen did has no precedent,” says Alex. “They achieved their first day of energy independence in 2014, their first month in 2015, and are well en route for a full quarter! It is truly amazing.”

“We were surprised we could do it at the Factor Four scale,” Alex continues. “Seeing what Gundersen achieved, we now know for certain it can be replicated across the entire Burnaby campus.” 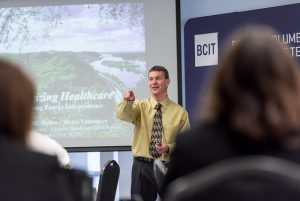 Corey Zareki, Director of Engineering and Operations at Envision, Gundersen Health System, speaks at BCIT about how his organization became carbon neutral without relying on offsets.

Eager to learn more, BCIT organized two days of activities for people from across the province to learn from Gundersen. Events included a full-day workshop for Energy Managers from various BC universities and healthcare authorities—organized with the support of BC Hydro—a meeting with key private sector partners, a presentation to BCIT students from five different programs, and a meeting between Corey Zareki and Metro Vancouver's Chief Administrative Officer to explore how our region could move the Zero-GHG agenda faster by looking at the Gundersen Model. And that was just day one.

On day two, Corey met with BCIT's internal champions and experts as well as Sharmen Vigouret-Lee, Dean, BCIT School of Health Sciences, to discuss strategies for our planned Health Sciences Centre for Advanced Simulation. The two discussed ways we too could set energy intensity targets for our new buildings, and lead the way in green healthcare.

Finally, in a talk called, “How to Become Carbon Neutral Without Relying on Offsets,” Corey presented to key partners and stakeholders, providing insight into why healthcare organizations should care about energy management and how the Gundersen program achieved energy reduction over a short amount of time. He also spoke about different measures for reducing energy consumption and how to quantify the financial benefits from these energy-saving projects.

“BCIT is more and more seen as a provincial leader in zero energy/zero emissions buildings, which is great,” says Alex. “After working with and learning from Gundersen Health, I have no doubt that we are on track to achieve our targets.”