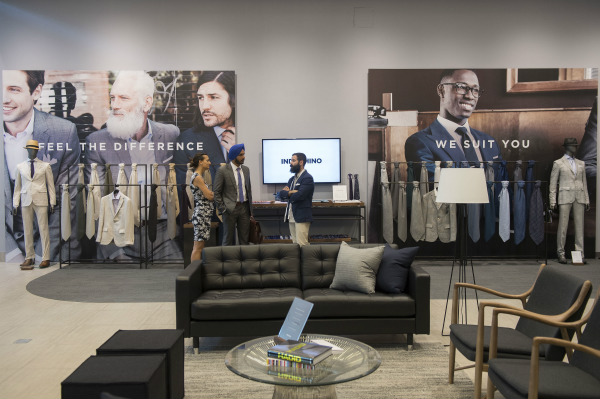 Vancouver, BC, February 10, 2017--(T-Net)--INDOCHINO, a leader in made-to-measure menswear, has announced plans to expand its retail footprint and open eight new showrooms in 2017.

Three will launch in the Canadian cities of Edmonton, Calgary and Greater Vancouver this spring, with a further five scheduled for major cities in the U.S. later this year as the company continues to grow at a rapid pace.

INDOCHINO, which makes custom clothing accessible to everyone by updating the traditional tailoring experience for the mass market at a price comparable to ready-to-wear, will open in West Edmonton Mall on March 30 and Calgary's Chinook Centre on April 6.

Metropolis at Metrotown in Burnaby, Greater Vancouver, is also slated to open this spring, taking the total from ten to 13 showrooms spanning North America -- eight in Canada and five in the U.S.

In addition, the company, which started by offering made-to-measure clothing online before opening its first permanent bricks-and-mortar location in 2014, is actively investigating new markets in major cities such as Washington, D.C., and Chicago, where the company has a thriving online customer base.

The brand is also looking to open secondary locations in large markets such as New York.

"This year, we're almost doubling our showroom network as we focus on significantly expanding our experiential retail model," said Drew Green, Chief Executive Officer at INDOCHINO. "As we continue to bring our unique showrooms to more cities and introduce custom clothing as an attractive and affordable alternative to ready-to-wear, we're beginning to change the way a generation of men suit up, and that's incredibly exciting to see."

Customers are paired with an expert Style Guide who helps them to design their one-of-a-kind suit or shirt. Style Guides take measurements, assist with fabric selection, and walk shoppers through endless custom options, including buttons, pockets, lapels and monograms. Each garment is made-to-order and delivered within four weeks.

Customers can walk in or make an appointment online at: www.indochino.com/showrooms.

"We pride ourselves in offering an exceptional experience that is personalized for every customer," continued Green. "Whether he's helped in a showroom by a Style Guide, follows our intuitive online ordering process at home or switches between the two, we want to simplify tailoring for today's man and, in the process, make sure he shops with us time and time again."

2017 continues the momentum gained in 2016, which was a record year for INDOCHINO with three new showrooms, year-over-year omnichannel sales growth of 54% and year-over-year sales in comparable showrooms ending the year at 32%.

In February 2016, the company announced a $30M USD strategic investment by Dayang Group, the world's largest suit manufacturer, which has helped accelerate the company's expansion plans, significantly enhanced the product offering to its customers, and generated additional operating efficiencies.

In 2017 the company's growth trajectory has continued, with January's year-over-year omnichannel sales growth over 50%.

"When I look back at all that we achieved last year, I am thankful to the entire team at INDOCHINO for their incredible work and also to our well-dressed customers who have watched us evolve and grow," continued Green. "We're already in our second month of 2017 and a year of ambitious goals and exciting challenges lie ahead. I personally cannot wait to continue the journey and build the largest suit retailer in the world."

INDOCHINO (www.indochino.com) makes custom clothing accessible to everyone by updating the traditional tailoring experience for the modern man. Through a seamless multi-channel approach to the customer experience, men are easily able to order high-quality, attainably priced made-to-measure suits and shirts plus accessories online, via mobile devices, or in-person at INDOCHINO showrooms.

Since its inception, INDOCHINO has grown from the first online business to provide custom tailored suits into the world's largest made-to-measure menswear company.