LlamaZOO chose the recent 2017 Western Veterinary Conference, one of the largest annual veterinary conferences in the world, as the venue to unveil this breakthrough in veterinary medicine.

“We've made tremendous leaps in EasyAnatomy's development this year, adding the complete nervous and circulatory systems along with animated pathologies” said LlamaZOO co-founder and CEO Charles Lavigne. “It's all lined up to make WVC the ideal place for us to demonstrate our medically accurate 3D canine in VR for the first time.” 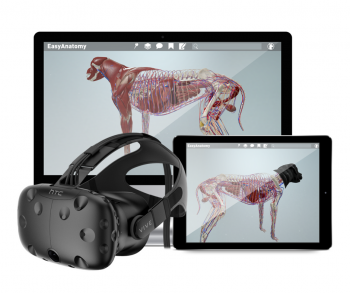 “Being able to interact with a life-sized virtual canine cadaver, place your head inside its abdomen, and hold its organs in your hands is an extremely convincing argument for the advantages of 3D interaction compared to plastic models or textbooks” added co-founder and VP Sales Kevin Oke.

EasyAnatomy is currently available on tablet, laptop, and desktop devices, and since its preliminary launch last summer has been adopted by veterinary practitioners, students, and educators all over the world.

LlamaZOO's aim is to help veterinarians have more engaged, informed, and effective conversations with clients about their pet's health, and the recent addition of animated pathologies to EasyAnatomy makes this even easier.

“Our veterinary advisors and customers have been urging us to add pathologies to EasyAnatomy since we first launched” commented Oke. “Showing an owner what a healthy pet should look like is one thing, but being able to present them with how their pet's ailment actually appears, and demonstrate how that condition will deteriorate over time if left untreated is incredibly powerful. Our users are excited to start having more informed conversations with clients, and to enjoy the resulting increase in compliance.”

Veterinary medicine is evolving, and veterinarians are increasingly adopting solutions that boost efficiency, and differentiate their practice in a competitive landscape.

“The newest generation of pet owners have grown up surrounded by technology, and they've come to expect the businesses they interact with to be technology-inclined too” said Oke. “The time and cost savings that an effective use of technology offers is too attractive to ignore, and we're seeing more and more veterinarians making innovative changes.”

LlamaZOO is a leading education technology company that develops award-winning interactive software. With a primary focus on veterinary medicine, LlamaZOO has partnered with distinguished international institutions including the University of Pennsylvania, the University of Missouri, and the University of Saskatchewan in developing its 3D veterinary anatomy solution, EasyAnatomy.

In March LlamaZOO will be one of 10 worldwide finalists competing in SXSWedu Launch. The company has previously been awarded the VIATEC Startup of the Year Award, been named “Top Regional Startup” by BCIC New Ventures, and was recognized as one of Douglas Magazine's “10 to Watch”. Founded in 2014 and privately held, LlamaZOO is headquartered in Victoria BC, Canada.