The award was presented by Circuits Assembly during a ceremony at IPC Apex Expo in San Diego.

The Service Excellence Awards (SEAs) are judged entirely on third-party, customer feedback across the categories of Responsiveness, Value for Price, Dependability, Quality, and Technology. As the ‘Highest Overall Customer Rating' Award Winner, Creation Technologies received the highest score in all five of the individual service categories.

“Winning the Highest Overall Customer Rating for the third year in a row and being recognized by our customers in this prestigious way is such an honor,” said Creation Technologies President and CEO, Bhawnesh Mathur.

“It's a testament to the daily hard work, entrepreneurialism and collaboration between so many people - our Creation team, our customers' teams, our suppliers' teams - to deliver the business results for our two-hundred-plus OEM customers that clearly make Creation stand out. We couldn't be more delighted to win this Highest Overall SEA as Creation's 25th Anniversary year comes to a close...and our 26th Anniversary year begins! We are extremely excited about what 2017 holds for Creation and for our customers.”

The Service Excellence Awards are sponsored by leading industry analyst, Circuits Assembly, and are open to EMS providers and electronics assembly equipment, materials and software suppliers worldwide. The EMS companies with the highest scores in each of five individual service categories also received awards. (Overall winners like Creation Technologies were excluded from winning individual categories). 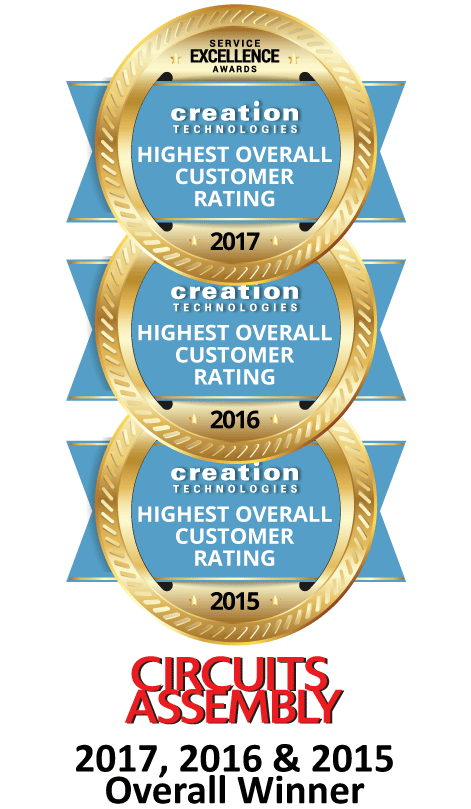 Creation Technologies (www.creationtech.com) provides total product lifecycle solutions including turnkey design, rapid prototyping, manufacturing and fulfillment to its customers around the world. Since 1991, Creation has been focused on making it easy for OEMs to ‘say yes' to their customers.