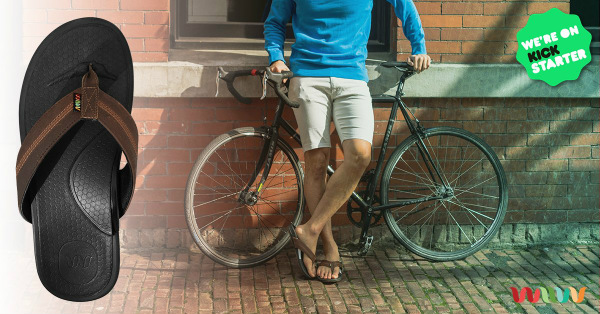 Vancouver, BC, April 18, 2017--(T-Net)--Wiivv Wearables Inc., a Vancouver and San Diego-based bionics company that creates 3D-printed custom gear, reported that it has broken the record as the most funded 3D Printed Product on Kickstarter with Wiivv Custom Fit Sandals.

After going live on the crowdfunding platform less than a month ago, Wiivv has reached 100 percent of its funding goal with over 2,500 backers on Kickstarter (for $250,000) and is now aiming for a Stretch Goal of $600,000.

With ten days left in the campaign, Wiivv's Custom Fit Sandal has surpassed its $250,000 goal on Kickstarter, making it the Most Funded 3D Printed Product ever. This overtakes the record set by the company last year with the Wiivv Custom Fit 3D Printed Insole.

Upon achievement of its $600,000 Stretch Goal, Wiivv has promised to deliver the sandal with premium leather footbeds and a wider range of leather straps.

"Hitting our goal tells me that customers want custom products," said Shamil Hargovan, CEO & Co-Founder of Wiivv and Forbes' 30 Under 30 recipient. "We set out to prove that they want this new category of footwear and clearly they do. This is the second time we've gone to Kickstarter and set the record for the most-funded 3D printed product. This backing, plus our 15,000-plus Custom Fit 3D Printed Insole customers, proves this market is here to stay."

Wiivv's success on Kickstarter comes as Adidas announces its partnership with Carbon, a hardware, software and molecular science company that is helping to move the 3D manufacturing industry forward by bringing 3D printing into the supply chain and by developing new materials.

"I'm thrilled to see footwear innovation powerhouse, Adidas, experiment with 3D-printed footwear. However, we believe the true power of 3D printing lies in the ability to customize it to you, unique to 14 billion feet. Wiivv has developed the technology to enable people to do this from their smartphone. That's what we've done for the first time in the world with Wiivv Custom Fit Sandals."

Wiivv's award-winning foot capture app for iOS or Android is behind the customization. Using over 200 data points on each foot captured on camera, Wiivv's revolutionary technology allows computer algorithms to pinpoint the unique length, width and arch support of each customer's feet.

"What the Sandal does for the first time is offer custom fit footwear at scale and at an affordable price point. We're created a solution that leverages what 3D printing is best at, making footwear just for you, while leveraging existing 3D printing technologies to do so. Clearly the industry is moving in this direction, and we couldn't be more excited to bring the benefits of custom worldwide."

Wiivv is a bionics company that creates custom, 3D-printed gear using body-perfect capture technology, accessible by everyone with a smartphone. Founded in the summer of 2014 by two Forbes' 30 Under 30 recipients, Wiivv is using the best in computer vision, mechatronics and biomechanics to promote body alignment and enhance athletic performance starting with its Custom Fit 3D Printed Insoles and now Custom Fit Sandals.

Wiivv's team is comprised of industry leaders in 3D printing and wearable technologies from companies including Apple®, EA®, HP®, Google®, Nike® and 3D Systems®. Wiivv is headquartered in Vancouver, Canada with a research and development/manufacturing facility in San Diego, California.