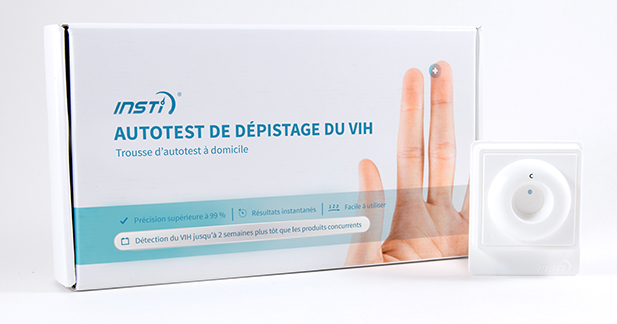 Vancouver, BC, April 26, 2017--(T-Net)--bioLytical Laboratories, a leader in rapid infectious disease tests, announced today the launch of the company's INSTI® HIV Self Test in pharmacies across Belgium.

The INSTI HIV Self Test is an over-the-counter adaptation of the INSTI point-of-care test which has been trusted by healthcare professionals in Europe for over 10 years.

As of 2014, of the estimated 2.5 million people in the World Health Organization (WHO) European Region living with HIV, approximately half were not even aware of their status. Locally, estimates suggest nearly 1 in 5 HIV-positive people in Belgium are unaware of their positive status.

There are several options available for getting tested, but having access to a very simple yet highly accurate test, allows consumers to test themselves without having to make an appointment at a laboratory, hospital or clinic.

"When developing a HIV home test, we wanted to provide an easy, affordable, consumer-friendly solution that would empower individuals to take control of their health in a discrete way, and within the comfort of their own home," said Robert Mackie, bioLytical's President. "By launching in Belgium, we are able to make HIV testing more accessible. INSTI HIV Self Test which can detect HIV up to two weeks sooner than all other HIV home tests currently on the market."

The launch in Belgium commenced today with an in-country sales team targeting up to 4,900 pharmacies nationwide. Please email retailsales@biolytical.com for further enquiries to list the INSTI HIV Self Test in your pharmacy.

The INSTI product line provides highly accurate test results in 60 seconds or less, far faster than the 15-20 minutes required for competitors' tests based on lateral flow technology. bioLytical has an active R&D program with a pipeline that includes tests for diseases such as Zika, Dengue, Chikungunya, Hepatitis C and Ebola, among others. The company also provides contract services to adapt the INSTI platform to meet custom functional and technical diagnostic testing requirements.