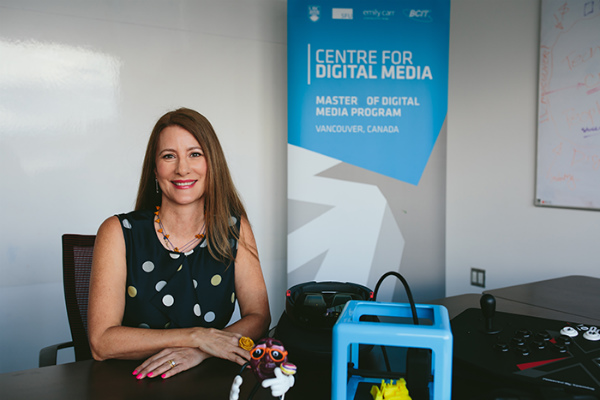 Vancouver, BC, May 1, 2017--(T-Net)--The Centre for Digital Media's Great Northern Way Trust has appointed veteran digital media entrepreneur and executive Catherine Warren to take on the role of president.

Reporting to and serving on the Great Northern Way Trust board, Warren will provide overall leadership for GNW Trust, including its four key business areas: the Centre for Digital Media, real estate development, property management and the endowment fund.

“Catherine brings a valuable blend of digital media entrepreneurship, business development acumen, as well as the academic values to lead the GNW Trust and the Centre for Digital Media district into the future,” said GNW Trust board chair Morgan Sturdy. “She takes the helm at a pivotal time of growth for Vancouver and for interactive media. Her extensive professional relationships in Canada and around the world will help to build our community and broaden our reach for years to come.”

Warren joins GNW Trust from the private sector as president of FanTrust Entertainment Strategies, a pioneering international digital media business development consultancy based in Vancouver. Throughout a career in digital media spanning more than three decades, Warren has lived and worked in Canada, the U.S., UK and Europe.

Born and raised in British Columbia, Warren was part of the New Media BC board that brought together the original vision and funding for Great Northern Way's Centre for Digital Media. “Coming aboard GNW Trust now, as the Centre for Digital Media's graduate program prepares to celebrate its 10th anniversary, I feel grateful to have come full circle as we look forward to the next decade of global digital transformation and to our city's growth,” says Warren.

“I'm honoured to take a lead role in facilitating the growth of British Columbia's digital media industry and community, and to evolve GNW Trust's strategy and vision together with the distinguished board and expert staff, faculty and students.”

Currently, Warren serves on the board of DigiBC, the industry association for video games, animation, visual effects and digital innovation; is a longstanding board member of Canada's Bell Fund, the country's largest private fund for digital media associated with television; is an executive board member of the World Summit Awards, a United Nations flagship program dedicated to celebrating the best in digital and mobile media from 167 countries; as well as various corporate and academic boards. She is a member of the International Academy of Television Arts & Sciences, renowned for the Emmy Awards, and serves on the Academy nominating committee.

Warren has a bachelor's degree in physics from Reed College in Portland, Oregon. She received her master's degree from the Columbia University Graduate School of Journalism in New York, where she did her original thesis work on-site at MIT covering the launch of its Digital Media Lab, and won the Correspondent's Fund Award to investigate the race between Europe and America at CERN, the European Centre for Particle Physics Research. 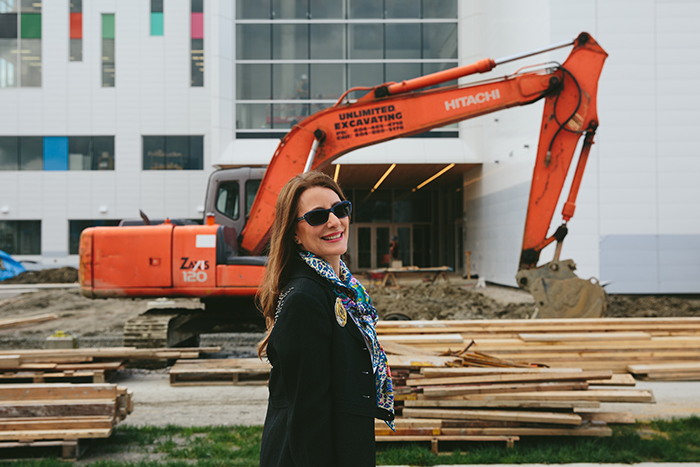 We sat down with Catherine to ask her some questions about life, work and digital media. She is unstoppable. We like what she has to say (and even what she doesn't have to say, but tells us anyway).

What drew you to this role at the Centre for Digital Media?

This is North America's best position in digital media. Vancouver is a wonderland. Our four institutions draw some of the best graduate students from around the globe and we are their Centre of Digital Media. Interactive entertainment is thriving here in Vancouver with companies from Microsoft and EA, to homegrown international sensations like Hootsuite and BBTV. We attract diversity, we are progressive and we represent innovation. It's all happening here.

What are your current digital media interests and what trends are you tracking?

My digital media focus is on media and entertainment, specifically how all-things digital are transforming the business of entertainment, creative production and audience participation. Historically, the relationship between media and fans has been top-down and arms-length. Digital media has brought moguls, creators and fans together, resulting in new entertainment products and raising the bar for media makers. Right now, some of the trends that I'm tracking include podcasting, in particular the emerging market for business-to-business podcasts where I also have some experience creating and hosting; professional video gaming, or what is known as eSports, slated to be a billion-dollar market in 2017, and where I am currently involved in launching North America's first 24-hr eSports broadcast channel; I'm also analyzing digital distribution and revenue models, as well as new currencies and ledgers such as Bitcoin and blockchain, specifically how they are transforming entertainment transactions. But the single, powerful digital media focus that continues to inspire me is fan culture -- and the immense generosity of active audiences in our interactive world.

Who has influenced your career?

My Mom, who is also a digital pioneer and innovator. She is the founder and CEO of Inside Information, which specializes in business intelligence and digital sleuthing. She had a modem in our house in the 70's!

Have you encountered obstacles as a woman working in digital media, which is quite male dominated? What advice would you give to females in their early 20's?

I love this question, because it is so important to look bias of any kind in the face. Working women continue to face obstacles and need support to triumph -- and everybody will benefit when we succeed. Support for women at all levels of work must range from policy to collegiality. Advocating for gender equity in business needs to start at the top, for example from shareholders, who can choose to invest in companies with more women on boards; to parents, who can give their daughters the same opportunities as their sons.

Women hold only about 3 percent of the clout positions in mainstream media, so media overall has a long way to go. That said, digital media is not the most male dominated sector that I've encountered, so I've had good practice on tougher playing fields. For students in the current Master of Digital Media Program, we have a 45-55 female-to-male ratio, so we are part of seeding change. And we are fortunate to be based in Canada, where education, government and the private sector are paying more attention to equality of all stripes.

When economics and human rights come together, change should be easy. But we know this isn't always the case. Still, it's good to be armed with some handy facts. For instance, companies with women on boards deliver better returns: on equity, on sales and on invested capital.

If you are a woman in your early 20's, bring together an informal advisory group from all areas of your life and of all ages. Take advantage of their wisdom, use them as a sounding board and draw them out on issues of parity and excellence. Add to this group as you face new challenges, change jobs or return to school. Remember, you don't have to go it alone. 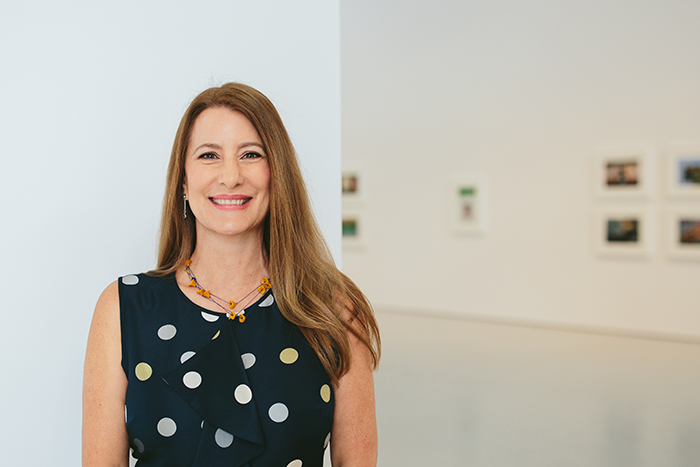 What is your vision for the Centre for Digital Media?

Together we have the chance to make the Centre for Digital Media a global destination for digital collaboration, education and exhibition. I see our district becoming more visible to the public, a place where Canadians and visitors, scholars and innovators can come to see digital media in action and experiment with new digital ideas. We can be the place where art and science meet and where people from all different backgrounds bring their skills and creativity to solve big problems through digital action and advocacy. We can stand out by telling Vancouver's stories through a digital lens, and tackling Vancouver's challenges through digital experiments. And when we combine the world's most beautiful city with the world's most exciting field, we will conjure up great things. The Centre for Digital Media gets a double benefit from “right place right time” - both Vancouver and digital media have come of age, and now have a spot on the global stage. All of this has happened as we prepare to celebrate our 10th Anniversary and look ahead to the next 10 years.

How do you plan to engage alumni in the future, and especially during this 10th Anniversary year?

Alumni will be centre stage for our 10th Anniversary celebrations in September 2017. The theme of our 10th birthday is “Homecoming”: a big welcome back for all our students from years past, and the families, friends and industry partners who supported them throughout their graduate studies. In the future, I'd like to see reunions with “Alumni U” where our grads can come back for a long weekend and immerse themselves in new media trends and tactics, combining professional development with partying and reconnecting with each other. Reed College, where I did my undergraduate degree, hosts a fantastic annual alumni college where students from years past, together with their parents, can take an immersive 3-day course taught by Reed professors. Over the years, I've participated in alumni college on fascinating topics, from “Moral Luck” to “Modern Chinese History”. (By the way, the philosophy of moral luck will make you question everything you ever believed about personal responsibility and good fortune - check it out.)

What advice would you give to the next generation of Digital Media students coming into this sector?

As a grad student, you have a rare opportunity to explore media from all angles, including art, design, business, technology, communications and more. Even if you choose to specialize, this interdisciplinary understanding will be invaluable in the workplace. Your future colleagues will benefit from your 360-perspective. Stay open to new ideas, we still call it “new media” for a reason!

Learn more about the GNW Trust.