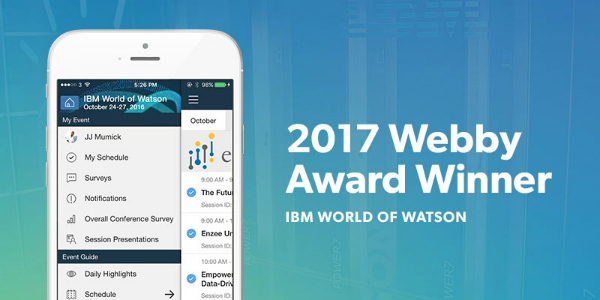 Vancouver, BC, May 8, 2017--(T-Net)--Eventbase announced today that the company has been recocognized as official winners of a 2017 Webby Award for the company's work with IBM on the World of Watson mobile event app.

"We have been picked by the Webby Academy as a winner in the Best Mobile Event app category, and competed against global brands like Macy's and Viacom. With 13,000 entries from all 50 US states and over 70 countries around the world, the biggest in the Webby's history, it's an honor to be selected as a winner for this category", stated the company in a blog release.

Eventbase teamed up with IBM to deliver the first artificial intelligence (AI) recommendation engine in a mobile event app, powered by Watson at World of Watson October 24-27, 2016. World of Watson commands high expectations for its groundbreaking sessions, high profile cognitive activations and the overall event experience. In collaboration with IBM, Eventbase leveraged its mobile event technology platform to push the envelope and create a transformative attendee experience.

One of the integral features of the app and what sets it apart from other mobile apps was the integration with Watson. Eventbase enhanced recommendations, and allowed attendees to receive personal session recommendations powered by cognitive services built by IBM Research.

Based on what content users added to their agendas, their friends favorited and interactions of attendees using the app, this proprietary service would analyze that data and provide tailored recommendations to attendees through the app.

The more content you favorited, the better the recommendations you'd received from Watson. In addition, IBM was able to track RFID scans as attendees strolled through the conference floor. For example, this would allow for even more personalized recommendations based on location.

This increased engagement, created a personalized experience for event attendees and raised the bar for mobile event apps. Leveraging IBM's forward thinking strategies in conjunction with Eventbase's innovative event technology platform, they were able to harness the power of technology to connect both individuals and ideas.