SFU Research: This Tiny ‘Cell' Packs Power - Then Can Be Tossed Away 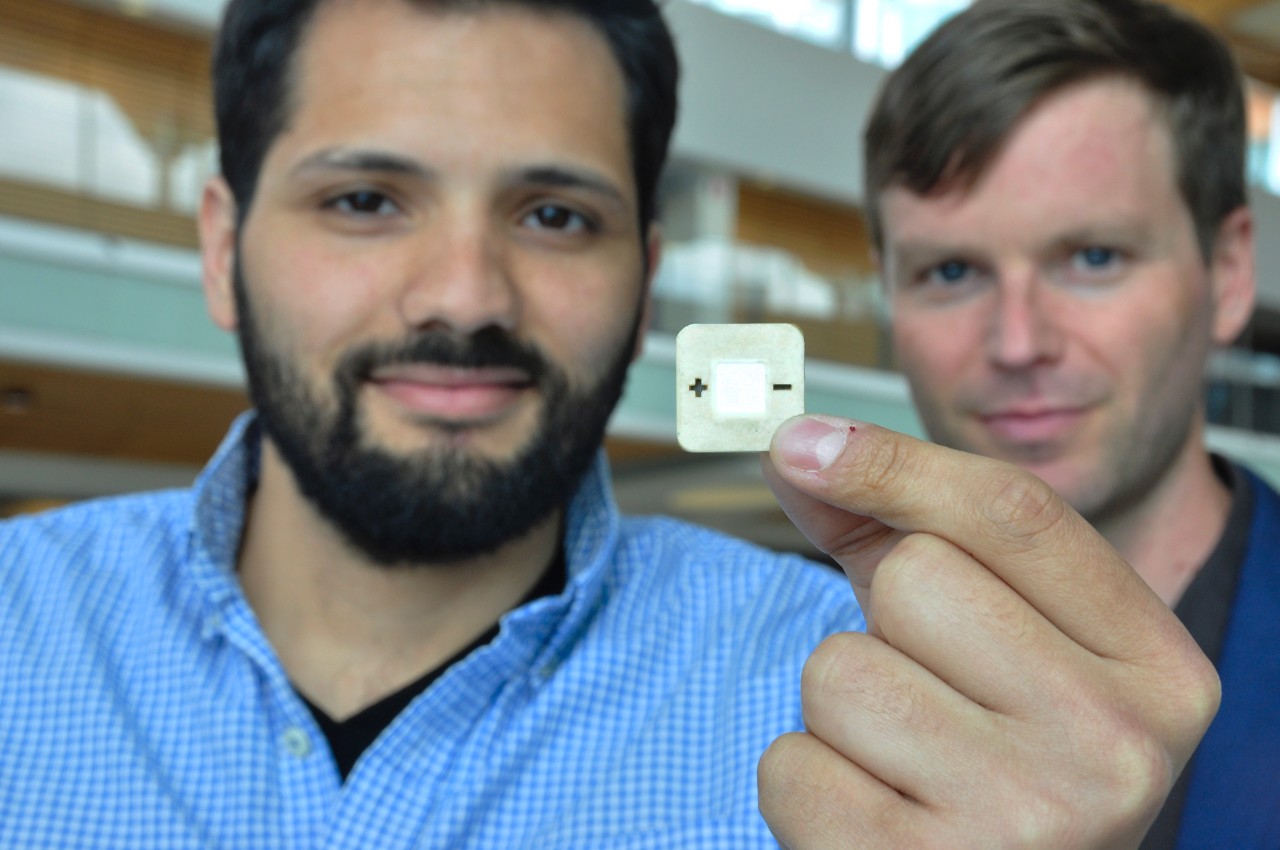 Burnaby, BC, June 22, 2017--(T-Net)--SFU researchers are developing a tiny power source that activates with only a few drops of water and can provide instant power up to 100 minutes before being tossed away.

The patent-pending biodegradable PowerPAD (Power: Portable And Disposable) is a single-use disposable battery—a mere inch in diameter—in which water stimulates a chemical reaction that changes the oxidization of its atoms.

The result is instant power capable of running a variety of portable electronic devices, such as diagnostic devices operating at 1.5 to 3.0 volts, where it can directly replace a lithium ion coin cell battery.

The light-weight battery, which continues to be fine-tuned, is being developed with a variety of applications in mind, from everyday use to meeting potentially critical needs, such as during disasters, or as temporary power in remote areas of the world.

The PowerPAD technology is a result of an international research collaboration between an SFU team led by Mechatronic Systems Engineering professor Erik Kjeang and Neus Sabaté and Juan Pablo Esquivel at the Instituto de Microelectronica de Barcelona in Spain.

Their research is featured in the June issue of The Electrochemical Society.

Fabricated using exclusively organic materials such as cellulose, carbon and wax, the PowerPAD features integrated, quinone-based redox chemistry to generate electricity within its compact form. Once depleted, it will biodegrade.

“The key benefit of the PowerPAD is its ability to deliver the power performance of conventional batteries in a completely biodegradable format,” says Kjeang, who was recently named a Canada Research Chair (CRC) in Fuel Cell Science and Technology Development—one of four new SFU CRCs announced this spring.

“We have created a battery that is fully compatible with the concept of ‘green electronics' and does not waste any resources in its life cycle, making it a truly environment-friendly power source.”

This outcome leverages the international team's collective expertise on flow cell technologies to design new biodegradable power sources. Their research was published in May in the journal Advanced Energy Materials.

The idea was conceived during a conference organized by the Electrochemical Society, where the research team entered the Science for Solving Society's Problems Challenge, sponsored by the Bill & Melinda Gates Foundation.

Researchers attending were challenged with developing an idea ‘outside the box' and pitching it to a panel of judges in a Dragon's Den event. Framing a concept around his primary research on creating more efficient fuel cells, Kjeang and his Spanish collaborators won a $50,000 prize for their disposable power source idea.

“We didn't expect to take it quite this far,” says Kjeang, whose team has since filed for a patent and together with the team, is continuing to refine the technology to improve reliability.

The PowerPAD prototype drew the interest of Prime Minister Justin Trudeau as he viewed research exhibits during a Surrey campus visit last November.

Prof. Erik Kjeang is one of four new CRC chairs which, together with one renewal, secured a total of $5.2 million in recent funding from the Canada Research Chairs program. Others include:

• Health Sciences professor Angela Kaida also had her CRC in Global Perspectives on HIV and Sexual and Reproductive Health renewed.