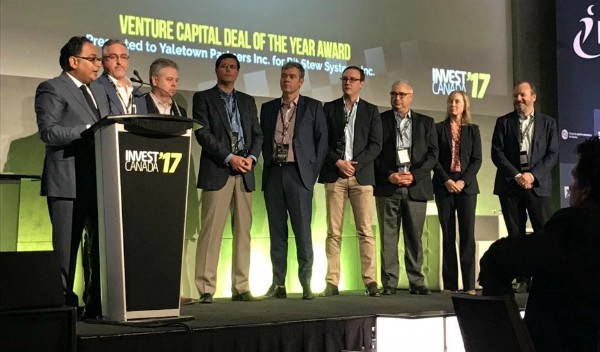 In November 2016, GE Digital acquired Bit Stew for more than $200-million to strengthen its Predix platform that connects industrial equipment such as power plants and aircraft engines to data and analytics that enhance performance of industrial businesses.

Yaletown, the first and largest investor in Bit Stew, made its initial emerging-growth investment in the company in 2013. Yaletown went on to participate in every round of Bit Stew's financing and helped the company to scale further by attracting a strong investor syndicate including Cisco Systems, GE Ventures, BDC Capital and Kensington Capital.

“Bit Stew's success demonstrates Canada's world-leading status in artificial intelligence and machine learning - technologies at the core of Bit Stew's data integration platform,” said Salil Munjal, Yaletown's Managing Partner and former Chair of the Bit Stew Board. “We appreciate CVCA's recognition of this significant deal, and are pleased to have attracted Bit Stew's founders as special limited partners in Yaletown, each of whom will help us realize more promising returns from Canada's industrial technology innovators.”

The Deal of the Year award follows Yaletown's recent announcement that it has opened a Montreal office, led by Shyam and Sophie Gupta, and expanded its team in Toronto. With additional offices in Vancouver and Calgary, Yaletown has become a national network focused on closing the growth capital gap faced by Canadian industrial and enterprise technology companies.

Yaletown invests in emerging-growth technology companies in Canada that enhance sustainability and productivity for industrial and enterprise customers. Our investments help Canadian technology companies in their initial growth phase to accelerate their growth, shorten exit timeframes and achieve strong exit premiums. Since 2013, Thomson Reuters' has ranked Yaletown as one of Canada's most active private independent technology investors. Yaletown is led by a team with almost 100 years of technology-industry experience and is backed by leading institutional investors and a network of successful technology entrepreneurs, executives and angel investors. Find out more about Yaletown and our portfolio of companies at www.yaletown.com