A.I Accelerates in Canada: Record High Investments in AI in the Past Five Years, According to PwC Moneytree Canada Report 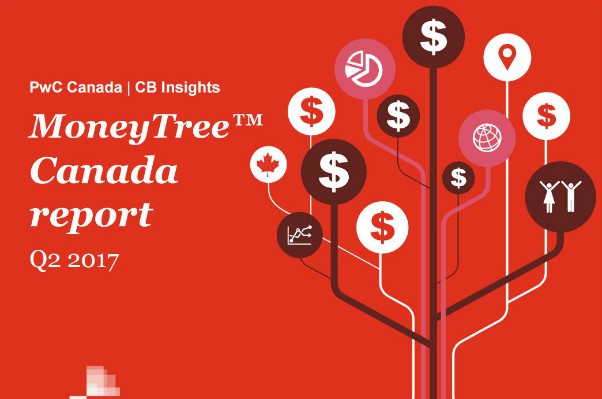 Vancouver, BC, July 21, 2017--(T-Net)--Artificial Intelligence (AI) attracted $162M in investments across 12 deals in the first half of 2017, the highest amount of funding in Canada in the past five years, according to the MoneyTree™ Report from PwC Canada and CB Insights.

Despite the record high in AI deals, investments in venture-backed companies based in Canada slowed down in the first half of 2017.

Sector-wise, Internet deal count was up 19% from Q1 2017; Healthcare and Mobile accounted for much of the quarterly decline in Canada as a whole.

In terms of thematic areas, a $102M mega-round pushed annual funding to Canadian AI companies to a high of $162M across 12 deals through H1 2017, while deal activity is also on pace to surpass last year's high.

"The increase of corporate investments in AI is shaping Canada as a leader in this sector," said Chris Dulny, National Technology Industry Leader, PwC Canada. "Canadian companies are attracting larger investments from top VCs who are increasingly focused on our homegrown tech talent and innovation. The funding landscape which includes corporate and government funding makes Canada a top destination for international investors who are keen to see tech reach its full potential."

Deals and dollars invested were both down in the leading hub of Toronto, with $107M deployed across 24 deals.

"This wasn't a great quarter for Canada's venture ecosystem especially when viewed against the global and US funding and deal trends our data reveals," stated Anand Sanwal, co-founder and CEO of CB Insights. "There are, however, some positive signals including the resilience in seed-stage deal activity and the continued presence of corporate and corporate VC investors. In addition, as artificial intelligence startups have risen to the fore globally, Canadian companies working in AI are also gaining momentum and interest."

The MoneyTree Report can be accessed here.

At PwC, our purpose is to build trust in society and solve important problems. More than 6,500 partners and staff in offices across the country are committed to delivering quality in assurance, tax, consulting and deals services. PwC Canada is a member of the PwC network of firms with more than 208,000 people in 157 countries. Find out more and tell us what matters to you by visiting us at www.pwc.com/ca.

PwC refers to the Canadian member firm, and may sometimes refer to the PwC network. Each member firm is a separate legal entity. Please see www.pwc.com/structure for further details.

CB Insights is a Pilot Growth and National Science Foundation backed software-as-a-service company that uses data science, machine learning, and predictive analytics to help our customers predict what's next—their next investment, the next market they should attack, the next move of their competitor, their next customer, or the next company they should acquire. The world's leading global corporations including the likes of Cisco, Salesforce, Castrol and Gartner as well as top-tier VCs including NEA, Upfront Ventures, RRE, and FirstMark Capital rely on CB Insights to make decisions based on data, not decibels.