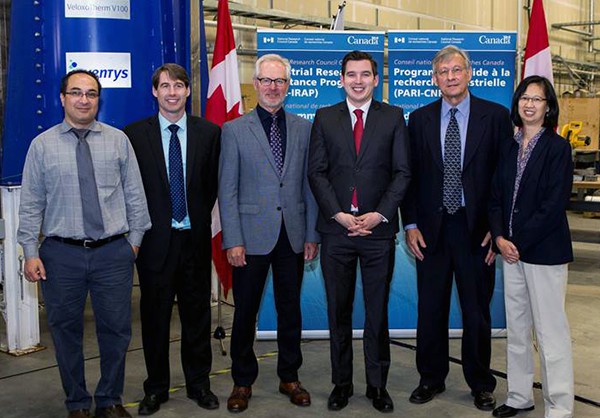 Burnaby, BC, July 24, 2017--(T-Net)--Cleantech company Inventys announced that it is receiving up to $275,000 from the Government of Canada to deliver a cutting-edge CO2 capture technology.

The announcement was made today by Terry Beech, Parliamentary Secretary for Science, on behalf of the Honorable Kirsty Duncan, Minister of Science.

“Investing in the low carbon economy has the potential to bring lasting health, economic, and environmental benefits to Canadians and people around the world,” said Parliamentary Secretary Terry Beech. “Our government's commitment to combatting greenhouse gas emissions means increasing opportunities for Canadian small and medium-sized inventors, like Inventys.”

This funding will go toward the development of Inventys' next generation VeloxoTherm system, a solid adsorbent technology. The VeloxoTherm system is a low-cost, non-toxic technology that captures CO2 from post-combustion emissions and is used by the energy and industrial sectors for greenhouse gas reduction.

This investment is made through the National Research Council of Canada Industrial Research Assistance Program (NRC-IRAP), which supports thousands of small and medium-sized enterprises in Canada every year in developing and commercializing innovative technologies.

“Inventys has the potential to develop a Canadian-made, new-to-the-world adsorption technology for carbon capture that removes the barriers to a low-carbon economy,” said Inventys' Executive Chairman, Wayne G. Thomson. “Funding from NRC-IRAP and the program's hands-on approach continues to have a significant impact on the development of our transformative clean energy technology.”

NRC-IRAP has worked with Inventys since 2008, attracting other investors and influencing the company's growth from two to 22 employees.