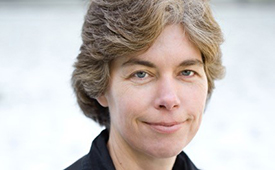 Vancouver, BC, July 31, 2017--(T-Net)--Professor Gail Murphy has been appointed as the new Vice-President, Research and Innovation for UBC.

Gail Murphy is currently a Professor in the Department of Computer Science and Associate Vice-President, Research pro tem at UBC. She is also co-founder and Chief Scientist at Tasktop Technologies Incorporated.

During her time as Associate Vice-President, Research pro tem, Professor Murphy has successfully led a series of initiatives for the university.

She was involved in the strategy and operations of the Research Excellence Cluster initiative; led growing interactions with Microsoft; helped found the Cascadia Urban Analytics Consortium (a joint initiative with the University of Washington); and led efforts to improve research infrastructure, including leading the Advanced Research Computing team.

Professor Murphy has held a number of administrative positions at UBC. She served as an Associate Head for the Graduate Program in Computer Science (2001-2003), Acting Co-Head of Computer Science (2010-2011) and Associate Dean, Research and Graduate Programs in the Faculty of Science (2013-2016). In the latter role, she led the development of the Master of Data Science degree, which received more than 500 applications in its second year of operation, and led the creation of the Data Science Institute at UBC.

Professor Murphy received her B.Sc. (Hons) in Computing Science from the University of Alberta in 1987. After graduation, she worked for five years as a software developer at the Burnaby based MPR Teltech Ltd.

Professor Murphy's research is in software engineering. She and her research group address problems related to knowledge worker productivity, seeking to augment the cognitive powers that humans possess with the computational power of computer systems.

One of the group's most successful research projects is a task-focused user interface known as Mylyn. Ten years after release, the Mylyn source software continues to be downloaded 1.5 million times per month.

The ideas behind Mylyn were the basis for the UBC spin-off Tasktop Technologies, which Professor Murphy co-founded with her former Ph.D. student, Dr. Mik Kersten and a research engineer, Robert Elves. Today, Tasktop software products lead the world in connecting software development teams. Tasktop currently has 120 employees, with headquarters in Vancouver and subsidiaries in the U.S. and U.K.

Professor Murphy is a Fellow of the Royal Society of Canada, an Association of Computing Machinery Distinguished Scientist, and is a recipient of a NSERC E.W.R. Steacie Memorial Fellowship.

Four of her published papers have received test of time awards, which recognize the most influential papers published ten years previous in a top venue. One of these papers was also recently designated a Google Classic Paper from 2006, a designation reserved for the top cited papers from 2006 in the area of Software and Systems.

Professor Murphy's appointment follows a comprehensive search process, involving a committee comprising representatives from the Board of Governors, Faculties, senior staff and UBC's student community. As Professor Murphy takes on this new role, Professor Helen Burt will step down from her position as Vice-President, Researchpro tem, which she has held since June 1, 2016. Over the last year, UBC has experienced tremendous research growth under Professor Burt's leadership. She will formally step down from the role August 13, 2017 and return to her position as Associate Vice-President, Research and Innovation.

Research is a central component of UBC's mandate as a public university. The Vice-President, Research and Innovation portfolio supports research and innovation activities and the work of UBC researchers with strategic information, resources and tools.