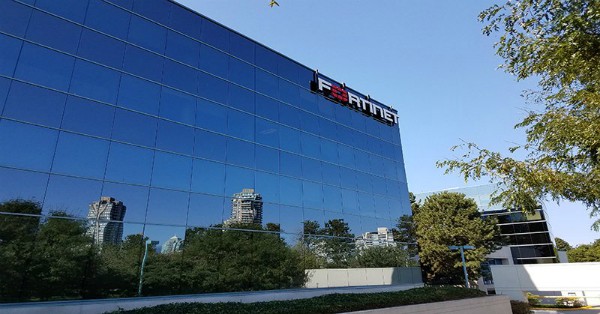 Fortinet's history in British Columbia dates back to the company's founding 17 years ago when it opened its first threat intelligence and R&D center in Burnaby.

Since then, Fortinet has massively expanded its operations, making Canada its global hub for research and threat intelligence, currently employing nearly 700 people in British Columbia and almost 1000 total employees in Canada.

The expanded campus will enhance Fortinet's industry-leading FortiGuard threat intelligence capabilities and house a cutting-edge data centre to support the continued growth of its innovative Security Fabric products and services. Located at 4190 and 4260 Still Creek Drive, the campus accommodates 1700 employees and will continue to serve as a R&D hub for the company.

“Burnaby, British Columbia and Canada at large has played a critical role in the growth of Fortinet from a startup to the global leader in high-performance cybersecurity. Growing up locally, I've witnessed our operations in Vancouver mature into the center of our FortiGuard threat intelligence research and become a hub of R&D for the company. It has been exciting to play a role in Fortinet's contribution to the success of the community in British Columbia over the past 13 years and we look forward to continuing that momentum going forward.”said Derek Manky, Global Security Strategist at Fortinet.

As one of the largest employers in the province, Fortinet's continued investment has played a significant role in the growth of the technology sector in Metro Vancouver.

Fortinet has earned British Columbia's Top Employers of the Year award for the last three years which has helped it attract and develop highly skilled cybersecurity experts, technology developers, engineers and other professionals in the province. Many of Fortinet's employees are top talent who grew up in the province and graduated from Canada's top educational institutions including the British Columbia Institute of Technology and Simon Fraser University.

Fortinet is estimating that the expansion will create 1,000 new jobs in the area when complete.

Fortinet's relationship with Canada also extends beyond economic benefits as Fortinet's Security Fabric solutions are trusted to protect local organizations like the Government of Canada and secures Canadian businesses across healthcare, retail, shipping, and other verticals that are critical to the success of British Columbia.

"Fortinet has been posting co-op positions to hire Simon Fraser University's Faculty of Applied Science students for over a decade and many Applied Science graduates have gone on to work at Fortinet. We are thrilled that the company is expanding its global development centre in Metro Vancouver, located near our Burnaby Mountain campus, and we look forward to an exciting new chapter in our growing partnership with Fortinet." stated Dr. Eugene Fiume, Dean, Faculty of Applied Sciences at Simon Fraser University

“As one of our largest home-grown tech successes, it's phenomenal to see Fortinet's plans to further expand their operations in British Columbia. Their continued growth in the area re-affirms the attractiveness of Greater Vancouver as a destination for global investment and global talent.” said Bill Tam, CEO of BC Tech Association

Fortinet (NASDAQ: FTNT) secures the largest enterprise, service provider, and government organizations around the world. Fortinet empowers its customers with intelligent, seamless protection across the expanding attack surface and the power to take on ever-increasing performance requirements of the borderless network - today and into the future. Only the Fortinet Security Fabric architecture can deliver security without compromise to address the most critical security challenges, whether in networked, application, cloud, or mobile environments.

Fortinet ranks #1 in the most security appliances shipped worldwide and more than 320,000 customers trust Fortinet to protect their businesses.

Learn more at https://www.fortinet.com, the Fortinet Blog, or FortiGuard Labs.

Fortinet has not independently verified statements or certifications herein attributed to third parties and Fortinet does not independently endorse such statements. Notwithstanding anything to the contrary herein, nothing herein constitutes a warranty, guarantee, binding specification or other binding commitment by Fortinet, and performance and other specification information herein may be unique to certain environments.