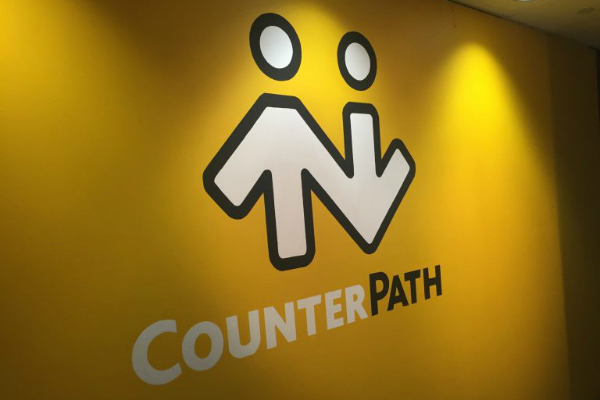 “I am pleased with the growth in new customers using our products and the contributions of our team members” said Donovan Jones, President and Chief Executive Officer.

“We expect to see revenue growth in fiscal 2018 as we build on our achievements from the first quarter. We maintained our focus on transitioning to SaaS as we recently began selling retail Bria Mobile for iOS and Android exclusively through subscription and anticipate launching cloud based software and services in the coming months that will enable enterprises to collaborate with their colleagues and externally with their customers. This evolution of Bria integrates voice, instant messaging, screen sharing and conferencing all under one application enabling users to do away with multiple communication services and reduce costs,” continued Jones.

(All amounts are in U.S. dollars and in accordance with accounting principles generally accepted in the United States (“GAAP”) unless otherwise specified - unaudited.)

CounterPath Unified Communications solutions are changing the face of telecommunications. An industry and user favorite, Bria softphones for desktop, tablet and mobile devices, together with Stretto Platform™ server solutions, enable operators, OEMs and enterprises large and small around the globe to offer a seamless and unified over-the-top (OTT) communications experience across both fixed and mobile networks. The Bria and Stretto combination enables an improved user experience as an overlay to the most popular UC and IMS telephony and applications servers on the market today. Standards-based, cost-effective and reliable, CounterPath's award-winning solutions power the voice and video calling, messaging, and presence offerings of customers such as AT&T, Avaya, BroadSoft, BT, Cisco Systems, GENBAND, Metaswitch Networks, Mitel, NEC, Network Norway, Nokia, Rogers and Verizon. Visit www.counterpath.com. 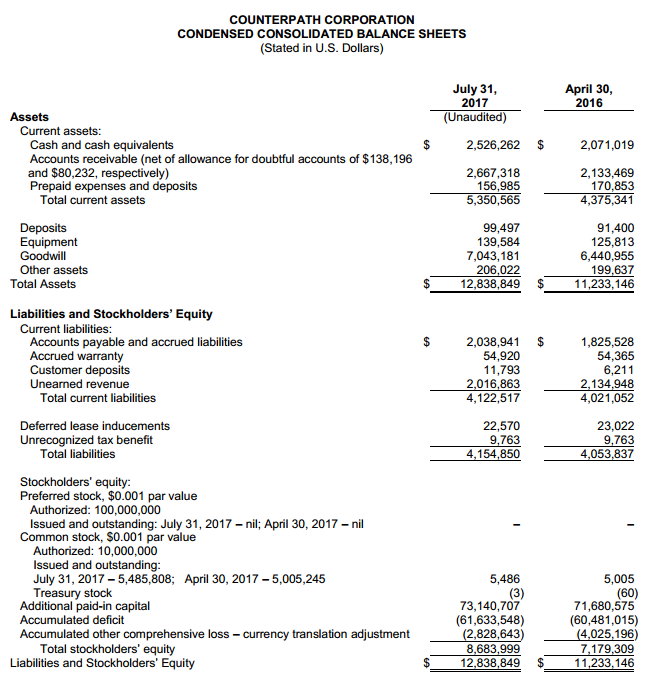 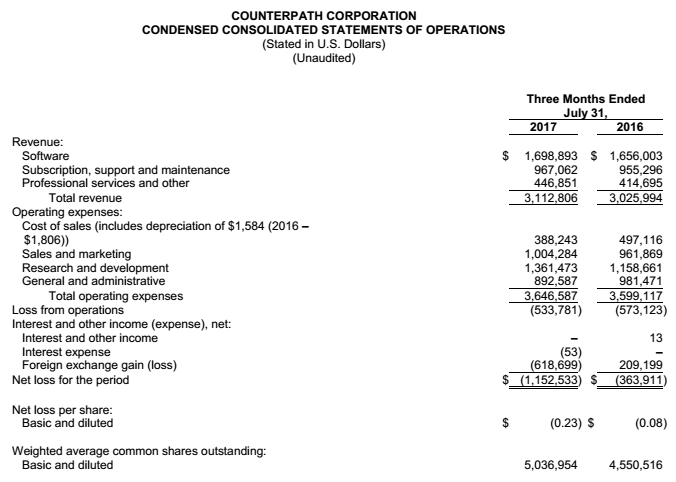 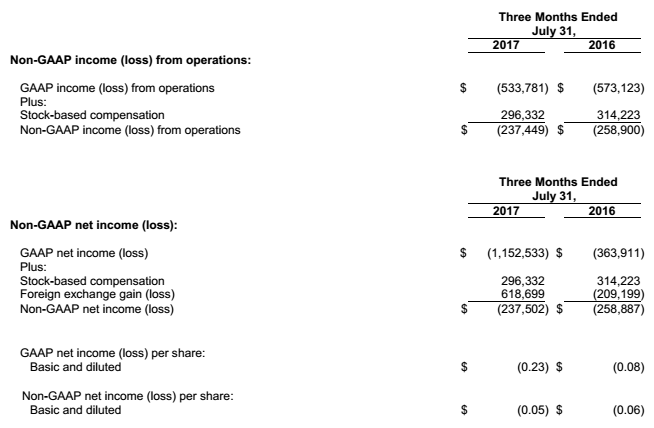 This news release contains "forward-looking statements". Statements in this news release which are not purely historical are forward-looking statements and include any statements regarding beliefs, plans, outlook, expectations or intentions regarding the future including: (1) the Company's expectation of revenue growth in fiscal 2018 as it builds on its achievements from the first quarter; and (2) the Company's anticipation of launching cloud based software and services in the coming months that will enable enterprises to collaborate with their colleagues and externally with their customers. It is important to note that actual outcomes and the Company's actual results could differ materially from those in such forward-looking statements. Actual results could differ from those projected in any forward-looking statements due to numerous factors. Such factors include, among others: (1) the variability in CounterPath's sales from reporting period to reporting period due to extended sales cycles as a result of selling CounterPath's products through channel partners or the length of time of deployment of CounterPath's products by its customers; (2) the Company's ability to manage its operating expenses, which may adversely affect its financial condition; (3) the Company's ability to remain competitive as other better financed competitors develop and release competitive products; (4) a decline in the Company's stock price or insufficient investor interest in the Company's securities which may impact the Company's ability to raise additional financing as required or may cause the Company to be delisted from a stock exchange on which its common stock trades; (5) the impact of intellectual property litigation that could materially and adversely affect CounterPath's business; (6) the success by the Company of the sales of its current and new products; (7) the impact of technology changes on the Company's products and industry; (8) the failure to develop new and innovative products using the Company's technologies; and (9) the potential dilution to shareholders or overhang on the Company's share price of its outstanding stock options. Readers should also refer to the risk disclosures outlined in the Company's quarterly reports on Form 10-Q, the Company's annual reports on Form 10-K, and the Company's other disclosure documents filed from time to time with the Securities and Exchange Commission at www.sec.gov and the Company's interim and annual filings and other disclosure documents filed from time to time on SEDAR at www.sedar.com.