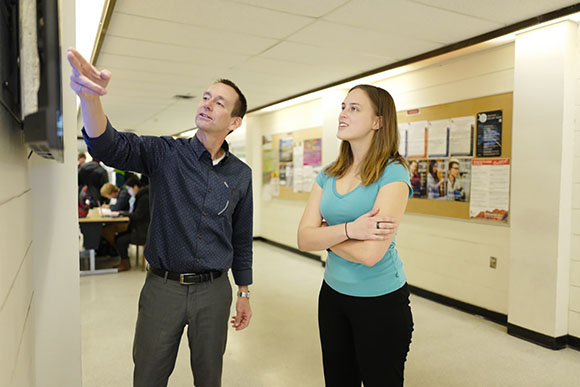 In a study published this week in Nature, the ALPHA Collaboration reports the first detailed observation of spectral lines from an antimatter atom.

The ALPHA Collaboration studies antihydrogen, the antimatter counterpart of the ordinary hydrogen atom. Their experimental results show a particular set of spectral lines in antihydrogen match those in hydrogen very well. The team plans to zoom in much closer to check if subtle discrepancies exist between the two atoms on a yet finer scale.

Conducted at the CERN laboratory in Geneva, the research involves irradiating antihydrogen atoms with microwaves, similar to those used to communicate with satellites. When this is done, the anti-atoms reveal their identity by emitting or absorbing energy at very specific frequencies. That pattern, or spectrum, of frequencies corresponds to the “fingerprint” described by Hayden.

“One of the challenges we face is that matter and antimatter annihilate when they come into contact with one another,” says Justine Munich, an SFU physics PhD candidate. “We have to keep them apart. We can't just put our anti-atoms into an ordinary container. They have to be trapped or held inside a special magnetic bottle.”

“By studying the properties of anti-atoms we hope to learn more about the universe in which we live,” says Hayden. “We can make antimatter in the lab, but it doesn't seem to exist naturally except in miniscule quantities. Why is this? We simply don't know. But perhaps antihydrogen can give us some clues.”

This article was adapted with permission from Simon Fraser University.