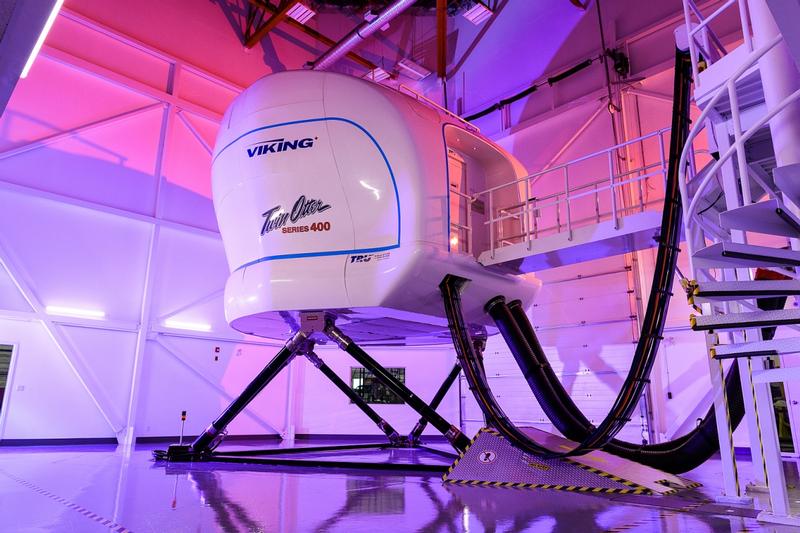 Transport Canada's Qualification process ensures that the Full Flight Simulator is an exact representation of the Twin Otter Series 400 Type Design with respect to its cockpit, avionics systems and flight behavior, validating the device as a true digital simulation of the flight characteristics of a real aircraft.

The Series 400 Twin Otter Full Flight Simulator provides instructors with the ability to program training events from any airport or GPS location, a valuable feature for customers operating from remote locations or conducting special operations unique to the Twin Otter. In addition, the digital simulation is the only way to safely recreate emergency situations, allowing pilots to practice emergency procedures approved by the aircraft manufacturer without exposing personnel to greater risk.

The Series 400 Twin Otter Full Flight Simulator is the first of its kind in the world to offer seaplane training options using the same Level “D” capability, allowing Twin Otter seaplane pilots the opportunity to safely practice takeoffs and landings in a range of sea states, winds, and water conditions, including glassy water. The seaplane configuration will be ready for training by mid-February 2018.

Pacific Sky's CEO Michael Coughlin said, “We are delighted that Transport Canada has completed qualification of our simulator, so we can further enhance the world class training we provide to Twin Otter customers from all over the world. This is the result of several years of hard work and brain power from brilliant aviation professionals at Viking, Pacific Sky, TRU Simulation, Honeywell and the National Research Council of Canada.”

David Curtis, President & CEO of Viking Air Limited, said, “We are excited that Pacific Sky has completed the final milestone of this important project, and is now “Ready For Training”. The simulator's leading edge technology will allow them to provide training for customers with diverse requirements, including operation of both wheeled and seaplane configurations of the Series 400 Twin Otter. This state-of-the-art training will not only enhance pilot proficiency and safety, but will also reduce the risk inherent with using actual aircraft for training.”

When complemented by a Twin Otter Flat Panel Trainer device, the Full Flight Simulator provides Pacific Sky Aviation the ability to offer operators a selection of Twin Otter Type courses, including Initial, Recurrent, Differences, and Upgrade courses. Pacific Sky Aviation has already completed courses on the simulator for two customers to date and are reserving simulator training slots for customers well into 2018.

Headquartered in Victoria, BC, Viking is the global leader in utility aircraft services, and the manufacturer of the world-renowned Series 400 Twin Otter. Viking is the Original Type Certificate holder for all out-of-production de Havilland aircraft, DHC-1 through the DHC-7, and provides exclusive spare parts manufacturing and product support for the legacy de Havilland fleet. In 2007 Viking launched the Twin Otter Series 400 production program, and to date new Viking aircraft have been sold to 29 countries worldwide.

In October 2016, Viking acquired the Type Certificates (manufacturing rights) for the CL-215, CL-215T, CL-415 aircraft and all variants from Bombardier. With the Type Certificate transfer, Viking assumed responsibility for product support for the global fleet of 170 aerial firefighters.

Viking is managed by Longview Aviation Capital and forms part of the portfolio of a prominent Canadian family investment firm which maintains a long-term investment horizon and is one of the leading investors in the Canadian aviation industry.