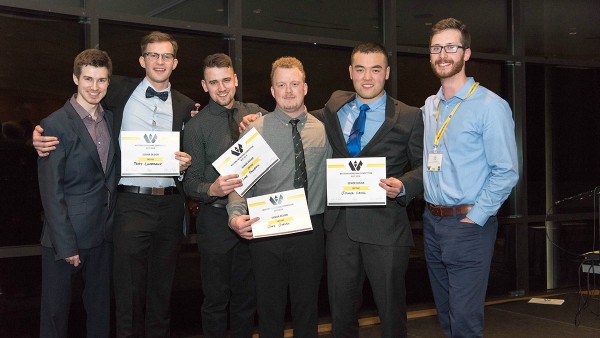 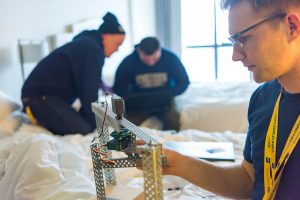 During the Senior Design competition, teams of four were presented with an engineering challenge to solve in eight hours or less. True to BCIT, “Innovation in a complex world” was the underlying theme for the competition. In eight short hours, the teams had to create an innovative prototype of a bridge to aid with the flow of traffic over a busy canal in Venice, Italy.

“I would say my teams win had a lot to do with the hands-on education we have received at BCIT,” comments Senior Design team member Josh Lang. For three years now, Josh and teammates, Terry Calderbank, Jake Jarvis and Luke Pankratz, have been in the Electrical Engineering Program. The program consists of many time-sensitive lab assignments much like the challenges posed in WEC. “Our lab experiences really took the pressure out of the time limit in the Senior Design competition, allowing us to completely focus on the challenge.”

Josh and his teammates were even able to complete their assignment with an hour to spare.

For Josh, “being able to network with upcoming top engineers in Canada and applying our education to something bigger than the classroom,” were the two most rewarding experiences from the competition.

Winning WEC is not the end for this team. This March, they will be competing again at the Canadian Engineering completion (CEC) in Toronto.

Congratulations to all the competitors

WEC is a student-organized event that wouldn't be possible without the support of the sponsors and volunteers. A big thank you to everyone who helped run the event.