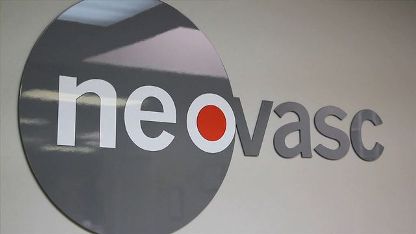 This leadership transition is a key element of the Company's strategy to support plans for the commercialization of its new-to-market Reducer™ product in Europe and the advancement of its Tiara™ mitral valve clinical program.

Alexei Marko, Neovasc's outgoing CEO, will maintain his role as a Director on the Neovasc Board of Directors and continue to serve as an advisor to the Company.

"Neovasc has reached an important turning point, and, as such, we have conducted a search for a leader with the experience and skill set to build on the progress made by Alexei Marko during his tenure as CEO," said Paul Geyer, chairman of Neovasc. "Fred Colen is a seasoned medical device executive with an outstanding track record and reputation as a strong leader. We believe he is exceptionally well qualified to lead Neovasc in its next phase of growth."

"Based on a strong belief in the promise of Neovasc's products, I am thrilled to join the Neovasc team and to lead the Company at this exciting time," said Fred Colen. "I will begin with a deep dive in all aspects of the Company, including its products and operations, during the next few months, with the goal of determining the right strategy to create the most value for the Company's various stakeholders. I look forward to working with our investors, employees, suppliers, and customers to expand commercial utilization and to bring the Tiara mitral valve to the market for the benefit of patients."

"Alexei Marko has been a very capable leader since the Company's inception ten years ago. His considerable expertise, determination, and focus have been instrumental in executing Neovasc's corporate goals and achieving key milestones," added Mr. Geyer. "The Board is grateful for his dedication to the Company and his continued guidance as a trusted advisor in achieving a smooth leadership transition."

"After ten years building Neovasc, I am convinced that now is the time for new leadership to take the Company to the next level. I am especially pleased that an industry leader of Fred Colen's caliber has accepted this opportunity," said Alexei Marko, outgoing CEO of Neovasc. "I look forward to my continued involvement as a board member."

Fred Colen has contributed to many significant turnarounds in his career, including the post-acquisition Guidant Company, which became the CRM division of Boston Scientific, a firm with which he held progressively senior executive roles over 11 years, including Chief Technology Officer from 2001-2008 and Member of the Executive Committee from 2001-2010.

During his tenure at Boston Scientific, Mr. Colen is credited with numerous successes. As President of the company's Cardiac Rhythm Management (CRM) Group his team regained trust and confidence in the division's implantable pacemakers, leads, defibrillators and re-synchronization devices, increasing annual product revenue growth by over 10% in a flat US market and growing global divisional operating income from below 10% to 25% of sales, exceeding the planned annual free cash flow goals.

As Chief Technology Officer, he led the development and global commercial launch for the Company's first- and second-generation implantable drug-eluting coronary stents (the Taxus Express and Taxus Liberte), leading to global market leadership with incremental revenues of US$2 billion annually.

The Taxus Express market introduction is viewed as one of the most successful launches ever in the medical device industry.

Prior to joining Boston Scientific, Mr. Colen, in his role as Executive Vice President in the Pacesetter division, played a key role in the execution of St. Jude Medical's diversification strategy, which resulted in its evolution from a successful heart valve company to a broad-based medical device company with a highly successful cardiac rhythm management business. In addition to restructuring organizational processes, he introduced the "Fast Cycle Time" approach in R&D to reduce development cycle times and optimize timing of new product introductions and manufacturing processes. During this time period, St. Jude also achieved a sharp increase in European sales through business focus, additional sales capacity, and marketing campaigns.

Mr. Colen most recently served as the President and Chief Executive Officer of BeneChill, building its early stage business in Europe and developing its clinical, regulatory and marketing strategy for the US market. He oversaw financing rounds E and F before the company was acquired by a Swedish firm that specializes in brain cooling.

Mr. Colen has also held a number of Board Directorships or Advisory roles, including Mölnlycke Healthcare, Biim Ultrasound, and GTX Medical. He served on the Board of Middle Peak Medical, a company developing a mitral valve replacement device, until its acquisition by Symetis, which in turn was acquired by Boston Scientific.

Neovasc is a specialty medical device company that develops, manufactures and markets products for the rapidly growing cardiovascular marketplace. Its products include the Reducer, for the treatment of refractory angina which is not currently available in the United States and has been available in Europe since 2015, and the Tiara, for the transcatheter treatment of mitral valve disease, which is currently under clinical investigation in the United States, Canada and Europe. For more information, visit: www.neovasc.com.

This news release contains forward-looking statements within the meaning of the U.S. Private Securities Litigation Reform Act of 1995 and applicable Canadian securities laws regarding the Company's plans and expectations concerning the commercialization of the Reducer, the advancement of the Tiara clinical program and bringing the Tiara to market, Mr. Marko's future service on the Company's board of directors and Mr. Colen's future work as CEO, the Company's next phase of growth and future performance, the transition of leadership at the Company and the growing cardiovascular marketplace. Words and phrases such as "drive", "advances", "plans", "will", "maintain", "continue", "build", "believe", "next phase", "strategy", "look forward", "continued", "transition", "next level" and "growing", and similar words or expressions, are intended to identify these forward-looking statements. Forward-looking statements are based on estimates and assumptions made by the Company in light of its experience and its perception of historical trends, current conditions and expected future developments, as well as other factors that the Company believes are appropriate in the circumstances.

These risk factors and others relating to the Company are discussed in greater detail in the "Risk Factors" sections of the Company's Annual Information Form and Management's Discussion and Analysis of Financial Condition and Results of Operations, each of which is included in its Annual Report on Form 40-F, and the Company's Management Discussion and Analysis for the third quarter of 2017 (copies of which filings may be obtained at www.sedar.com or www.sec.gov). These factors should be considered carefully, and readers should not place undue reliance on the Company's forward-looking statements. The Company has no intention and undertakes no obligation to update or revise any forward-looking statements, whether as a result of new information, future events or otherwise, except as required by law.