"Our ability to innovate and compete is gated by the speed of our networks," stated Mr. Hutchison. "We need to lead the world in broadband speed - to adopt what I call a Global Broadband mentality."

"Right now, we are struggling to catch up. We need to jump ahead. Smart Communities with fast networks set the pace for continuous transformation, and that is what we urgently need."

"The Waterfront Toronto network has spurred over $13-billion in private-sector investment," he added.

Recently, Mr. Hutchison joined the Board of i-Valley, a not-for-profit based in Nova Scotia that is helping to transform ten rural communities. "We are doing things that are world-leading,' confirms i-Valley President Terry Dalton.

Citing a serious underfunding challenge, Mr. Hutchison noted that we need to think of our 'info-structure' on and adequate scale: "We need to spend the same amount on Broadband as we spent on our roads, electrical systems and water systems. Broadband speed equals innovation capability - the numbers show that when broadband falls, innovation stagnates."

"Organizations like the Conference Board of Canada and the Centre for Digital Entrepreneurship and Economic Performance tell us that we are at an innovation standstill," stated Mr. Reid. "Until we jump the other nations in broadband speed we can expect no changes to that picture."

Mr. Hutchison called for the creation of a "Smart City Czar" in the federal government, who would be responsible for coordinating all spending programs and aligning work with the provincial and municipal governments. "There is no Plan B here," concluded Mr. Hutchison, "The global marketplace is increasingly competitive and a "fourth industrial revolution" centred on intelligent machines may overwhelm us sooner than we think. Smart communities are the best battle-grounds for sustainable source of future growth."

For a copy of Mr. Hutchison's presentation please contact: 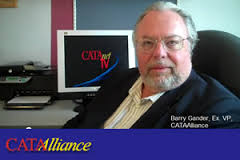