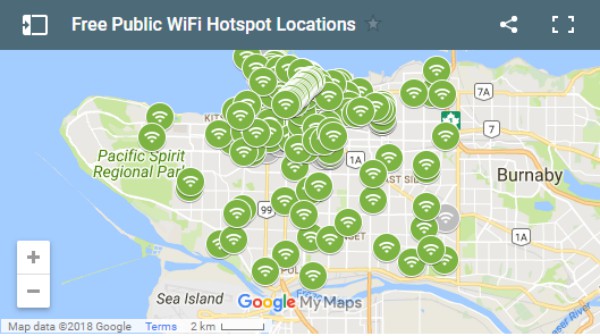 Vancouver, BC, January 24, 2018--(T-Net)--The City of Vancouver announced this week that #VanWiFi is now one of the largest free public-Wi-Fi networks in North America, following an expansion by Shaw of free WiFi locations in Vancouver.

"Shaw's expansion of #VanWiFi, covering more than 500 locations in the downtown core and surrounding areas, is a huge win for our residents and businesses, and helps to move Vancouver forward in becoming a truly leading Smart City," said Mayor Robertson.

"Shaw's expansion of #VanWiFi, covering more than 500 locations in the downtown core and surrounding areas, is a huge win for our residents and businesses, and helps to move Vancouver forward in becoming a truly leading smart city," said Mayor Gregor Robertson.

"People are more digitally connected than ever before and good WiFi accessibility citywide has an important role to play in helping locals and visitors navigate Vancouver and our City services, while also supporting Vancouver's tourism and economic development. This large-scale digital infrastructure expansion will help people to more easily connect and interact online, wherever and whenever they want."

In total, those who live, work, or visit Vancouver will have access to free public WiFi at over 600 locations throughout the city.

How we got here

In 2014, the Cityof Vancouver implemented a procurement process to solicit applications from telecommunications service providers to provide free public WiFi at no cost to the City.

Shaw was one of the vendors selected as 'Pre-Qualified' to supply free public internet at identified, and future, locations in Vancouver.

After 42 locations were equipped with #VanWiFi in 2015, Shaw was chosen for the second phase in 2016 to provide VanWiFi at 15 locations, including all nine City-owned social housing sites and six outdoor sites, expanding the existing #VanWiFi network at no cost to the City.

The Granville location is now live with the remaining sites becoming active over the coming months.

In addition to the 15 locations requested by us as part of the phase two #VanWiFi expansion, the Shaw offering also includes an additional 500 plus WiFi locations spread widely throughout the downtown core and surrounding areas, including the following highly-concentrated spaces:

It also includes 125 Mobi by Shaw Go bike station locations, of which 49 are currently enabled with #VanWiFi provided by Shaw.

"Like our partners at the City of Vancouver, we understand how important it is to have access to a broadly available WiFi network in the places we frequent the most," said Jim Little, Executive Vice President and Chief Marketing and Culture Officer, Shaw Communications. "This vast expansion of the #VanWiFi public network will give residents and visitors to Vancouver easy connectivity in the busiest locations across the city, whenever they want and need it for free."

Currently, about 550 free public WiFi locations are currently active, with the remaining locations becoming active over the coming months.

"This is an exciting development for the visitor experience in Vancouver" said Ted Lee, Tourism Vancouver's CFO and Commercial Director. "Free WiFi service in key locations will enable visitors to use their smart phones and devices to discover attractions, activities, and restaurants, for wayfinding, and to navigate Vancouver's transportation options.

"It will also better enable visitors to use social media on a real-time basis to share their Vancouver experiences with the world. Furthermore, this is an important development for the Vancouver tourism industry as it moves us closer to our goal of being a 'smart' tourism destination. Congratulations to the City of Vancouver and to Shaw for this great partnership."

Free public WiFi is a core component of a smart city

The #VanWiFi project is a core component of the City's Digital Strategy aimed at enhancing the public's experience within the city through online, mobile, and social media channels.

Free and accessible internet connectivity is a fundamental aspect of many digital and smart city initiatives, which use data and connected technology to address urban issues in new and efficient ways. The recent expansion of the #VanWiFi network with the help of Shaw builds a new public platform for smart city services and the public's access to the internet.

Connecting citizens to mobile applications like VanConnect, which provides access to City Hall services on the go, is an example of how Vancouver is digitally transforming into a leading smart city.

Not only is a broadly deployed public WiFi network identified by the Digital Strategy as a key indicator of a digital city, it also aligns with the Tourism Vancouver Master Plan and the Vancouver Economic Action Strategy.

Vancouver is a smart city