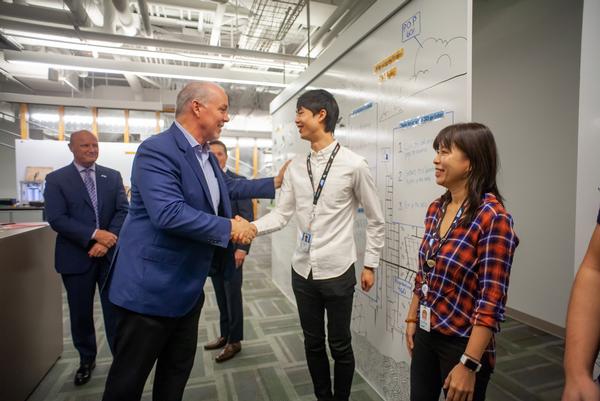 SAP is a global market leader in enterprise application software. SAP's Vancouver labs has added over 300 jobs over the last two years in downtown Vancouver, representing an almost 15% growth in its employee base.

This completes the second phase of a $22-million capital investment and solidifies SAP Labs Vancouver as a key global location for SAP.

Premier John Horgan toured the interactive lab at SAP Canada's Vancouver location as part of the unveiling, and highlighted the 300 new jobs SAP has created over the past two years and government's support to help grow opportunities in British Columbia's tech sector.

"Our job is to help people succeed and invest to help companies innovate and grow to create good jobs in B.C.," said Premier Horgan. "Success stories like SAP are growing in every part of the province. Our government is going to keep working in partnership with the tech sector to deliver the supports they need and is investing in the health care, education, housing and other services that make British Columbia a great place to live and work."

The tech sector in B.C. is one of the fastest growing sectors of its economy, supporting over 106,000 good-paying jobs. It is home to more than 10,200 businesses. To help spark B.C. innovation, economic growth and new jobs, the provincial government is investing in tech-based research and advanced training opportunities throughout the province.

"The tech industry in B.C. continues to thrive and SAP's expanded facility supports hundreds of good jobs for people in our province," said Bruce Ralston, Minister of Jobs, Trade and Technology. "Our government is committed to supporting the growth of the tech sector as part of a strong, sustainable economy that works for all British Columbians."

Premier Horgan also heard directly from interns and employees at SAP, who shared their experiences and challenges.

"SAP was thrilled to have the Premier join us to unveil our expanded Vancouver facility today. We are proudly the largest software employer in British Columbia, committed to this province and to developing local talent," said Kirsten Sutton, managing director. "We stand side by side with Premier Horgan and his government with common goals to solidify B.C. as a high-tech powerhouse."

In addition to SAP's continuing job opportunities, the company boasts a robust internship program, employing a rotating base of 175 young people in B.C.'s tech sector. According to SAP, 36% of its interns extend their term or move to full-time jobs within the company.