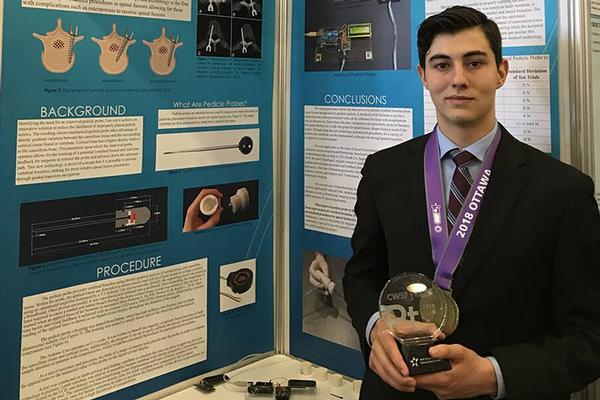 Vancouver, BC, October 2, 2018, 2018--(T-Net)--The Science Fair Foundation of BC announced this week that Grade 11 student Nicolas Fedrigo, 17, from Cordova Bay, Victoria was awarded the First prize, valued at roughly $10,500, at the European Union Contest for Young Scientists, held in Dublin, Ireland on September 18th.

As a finalist from the VIRSF, his project took him on his third trip to the Canada-Wide Science Fair (CWSF) held in Ottawa on May 16th 2018, where he won the Platinum Award for Best Senior Project.

Fedrigo's inspiration for this year's project came from the knowledge that twenty-nine percent of people who undergo spinal fusions end up suffering from vertebral breaches which can cause extreme complications such as infection and paralysis.

Fedrigo was able to reduce the frequency of vertebral breaches by devising a new technology that can be incorporated into the existing surgical tools to warn the surgeon if they are tapping into the wrong part of the vertebral column.

2018 marks the third consecutive year that Fedrigo has been selected as a finalist at the VIRSF. In 2017, Fedrigo developed a robotic-assisted therapy glove to help rehabilitate people who have suffered from a stroke. In Grade 9, 2016, he developed a hand-cooling glove to improve athletic performance.

Students from all areas of the province are beginning work on their projects to the 2019 Science Fair season. Come spring, thousands of students will present their ideas for school Science Fairs. As a result, they will develop an appreciation for research and innovation as they engage in their own discoveries, peers and experts in their fields. At least 2,000 of these young scientists, from schools throughout British Columbia, will take part in the annual Regional Science Fairs.

The Science Fair Foundation of British Columbia is the largest science and technology outreach network in the Province supporting science education by inspiring curiosity through the Science Fair program.