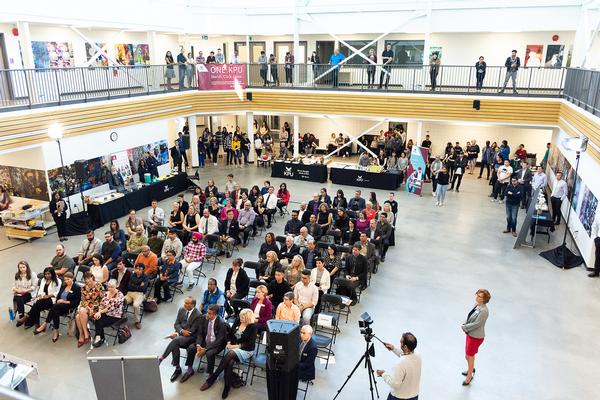 "Students in science, health science and the arts will benefit from the new science labs and exciting arts spaces, including 3D studios and digital arts labs," said Melanie Mark, B.C.'s Minister of Advanced Education, Skills and Training. "The Spruce Building is now one of the most innovative learning spaces in the province. I'm proud to be a part of a government that is investing in students."

The renovations and an addition allow space for 300 more students to study at KPU, including in two recently launched programs: bachelor of science degrees in biology and health science.

The Province contributed $14.7 million to the renovation, in addition to $7.3 million from the Government of Canada's Post-Secondary Institutions Strategic Investment Fund.

"We're positioning Canada as a global centre for innovation with this once-in-a-generation investment in post-secondary institutions, like Kwantlen Polytechnic University," said Navdeep Bains, Canada's Minister of Innovation, Science and Economic Development. "Projects like this advance our government's vision to make Canada a world leader in turning ideas into solutions, science into technologies, skills into jobs and startup companies into global successes. And by investing in young minds, we're equipping them with the practical skills training they need to excel in the jobs of today, and to succeed in tomorrow's economy."

"Thanks to this investment by the provincial and federal governments, KPU is able to better support its students and meet the needs of growing sectors of the B.C. economy, including the scientific, creative and cultural sectors." said

The Government of Canada's Innovation Agenda aims to make Canada a global centre for innovation - one that creates jobs, drives growth across all industries and improves the lives of all Canadians. The investment at the Kwantlen Polytechnic University exemplifies that vision in action.

Upgrades to Kwantlen Polytechnic University's Spruce Building consisted of renovations to the 3,500-square-metre building, and a 2,100-square-metre addition.

KPU is Canada's only polytechnic university, focusing on hands-on skills as well as traditional academics. More than 20,000 learners a year take its diverse range of degree, diploma, certificate and citation programs.

More than 588,470 job openings are expected in British Columbia's Lower Mainland and southwest region between now and 2028. Health care and scientific and technical services are among the largest industries in the region.